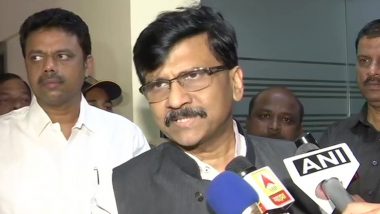 Bihar police can visit Mumbai to get information about Sushant Singh Rajput death case, but cannot investigate the case said Shiv Sena leader Sanjay Raut on Tuesday. While speaking to ANI, he alleged that the case is being politicised. "Bihar police can come to Mumbai to get information, they cannot investigate. If you do a parallel investigation, I think it will be an injustice to the Mumbai Police. Sushant Singh Rajput Death Case: SC to Hear Rhea Chakraborty’s Plea Seeking Transfer of FIR from Patna to Mumbai Today

If Mumbai Police is already investigating the case, so anyone not related to Maharashtra government and not related to the case should not comment on it. The Mumbai Police is capable of conducting the probe on its own," Raut said. "It is politics of Bihar election. After the election, those who are politicising it, won't even know where did Sushant Singh Rajput stay in Patna or what is his family doing. They will forget everything. Sushant was born in Patna but Mumbai gave him everything," Raut added. Sushant Singh Rajput’s Death: Bihar Governor Accords His Consent For CBI Probe in the Actor’s Suicide Case

The statement comes after Bihar Director-General of Police (DGP) Gupteshwar Pandey on Monday said that he was trying to get in touch with his counterpart in Mumbai after Patna Superintendent of Police Vinay Tiwari was "forcibly quarantined" by the Brihanmumbai Municipal Corporation (BMC) officials in Mumbai on Sunday. Tiwari is probing the case related to the late actor's death, who was found dead at his residence in Mumbai on June 14.

A team of Bihar Police is in Mumbai to probe the matter on the basis of an FIR which was registered in Patna, based on a complaint filed by Rajput's father KK Singh against actor Rhea Chakraborty under several sections including abetment to suicide. (ANI)