Is Kangana Ranaut Right in Saying She Is the Only One to Make Film on Maratha Pride in 100 Years? This Popular Twitter Handle Proves Her Wrong!

The film in question is, of course, Manikarnika: The Queen of Jhansi, that also happened to be Kangana's debut directorial (a credit that she controversially shares with Telugu filmmaker Krish). She plays the legendary Rani Laxmibai, a Maratha warrior and was the queen of Maratha princely state of Jhansi. 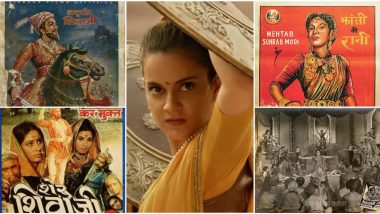 Kangana Ranaut continues to make one controversial statement after another, with her recent stand creating a lot of outrage from Mumbai. In response to Sanjay Raut's jibe against her, she compared the city to Pakistan Occupied Kashmir. When some of the Shiv Sena politicians asked her not to return to the city where she allegedly feels scared to be in, Kangana made yet another controversial statement in her tweets. She claims that she is the only person to have made a film on Maratha pride in 100 years! Kangana Ranaut Responds to Maharashtra Home Minister Anil Deshmukh’s 'Strict-Action' Remark, Says ‘From PoK to Taliban in One Day’.

The film in question is, of course, Manikarnika: The Queen of Jhansi, that also happened to be Kangana's debut directorial (a credit that she controversially shares with Telugu filmmaker Krish). She plays the legendary Rani Laxmibai, a Maratha warrior and was the queen of Maratha princely state of Jhansi. Manikarnika was released in 2019, where it received mixed response and was an average performer at the box office. Kangana Ranaut in Manikarnika, Alia Bhatt in Gully Boy – 8 Best Performances by an Actress in the First Half of 2019.

For now, let's ignore her vitriolic jibe about making Maratha pride movies in a 'Islam'-dominated industry, mostly likely a dig on the Khans, though we assume she has forgotten about Akshay Kumar, The Kapoors, Ajay Devgn, Sanjay Dutt, and a certain Mr Roshan. Let's concentrate on the claim that no one made a film on Maratha pride for 100 years before she made Manikarnika.

We will ignore Om Raut's Tanhaji, starring Ajay Devgn, Saif Ali Khan and Kajol, the biggest blockbuster of 2020, because it came out after Manikarnika. Or for the matter, Ashutosh Gowariker's Panipat, starring Arjun Kapoor, Kriti Sanon and Sanjay Dutt.

We will also forget Bajirao Mastani, directed by Sanjay Leela Bhansali and starring Ranveer Singh and Deepika Padukone. It might have come before Manikarnika, but it was less about 'Maratha pride' and more a love story.

So is Kangana right in her claims that she is the only person to have made a film on the theme in about 100 years? Not quite.

A Twitter handle called Film History Pics is known for tweeting rare trivia and posters of films of yore. Perhaps as a response to Kangana's claims, though its tweets don't mention so, the handle posted posters of those films made not just on Shivaji Maharaj but also on Rani Laxmibai.

Check out its tweets below:

The movies that Film History Pics have mentioned are Rashtraveer Shivaji, Sher Shivaji, Maharani Jhansi, and Jhansi Ki Rani - all movies made within 100 years in Maratha pride.

To give Kangana credit where due, very few Hindi films have been made on Maratha warriors in recent times, though quite a few has been made in Marathi cinema. There has also been a TV Serial on Colors TV called Veer Shivaji, based on the legendary Maratha king. Though we are still wondering about Kangana's claim that she made a film on Shivaji Maharaj. Any help there, readers?

(The above story first appeared on LatestLY on Sep 04, 2020 10:45 PM IST. For more news and updates on politics, world, sports, entertainment and lifestyle, log on to our website latestly.com).