Ishaan Khatter's Beyond The Clouds, Rajkummar Rao's Omerta - 5 Movies That Will Keep the Critics Busy on April 20

Any bets on which movie will back out of the rat race? 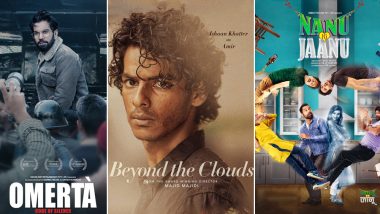 Dear fellow critics and movie reviewers, get ready to do some overtime in the third week of April. For not one but five Bollywood movies are ready to release on April 20, and they all demand your attention. From Ishaan Khatter's debut movie Beyond the Clouds to Rajkummar Rao's Omerta to spoof comedy High Jack, these five movies belonging to different genres will be vying for who gets the bigger share of screens and the box office earning on April 20.

Even though they are 'smaller' in scope when it comes to their budget and starcast, these five movies have the potential to win over the critics. However, with five of them coming out on the same day, we can imagine it would be a nightmare for the theatre owners and the distributors to arrange screens for them, not knowing which movie is going to click with the audiences. Interestingly a week before, only one movie is coming out and that's a biggie - Varun Dhawan's October. A week later, on April 27, comes Avengers: Infinity War and if possible, Rajinikanth's Kaala. So is avoiding clashing with these biggies the reason why we have five movies coming out on one day?

Anyway, below are the movies to check out on the day,

All the eyes of the industry will be on this purely for one reason - it is the launch of the star kid Ishaan Khatter, who is the half brother of Shahid Kapoor. Going by the trailer of the movie, they have nothing to worry about - Ishaan looks to be a competent actor and he has fine company in  the extremely talented Malavika Mohanan. Moreover the movie is made by the acclaimed Iranian film-maker Majid Majidi, who previously made festival darlings like Children of Heaven and the Song of Sparrows.

Rajkummar Rao and Hansal Mehta coming together for a movie is always good news for fans of good cinema, thanks to their past records (Shahid, CityLights, Aligarh). Omerta is based on the a true story based on the life of a dreaded terrorist mastermind Ahmed Omar Saeed Sheikh. The movie has won critical acclaim during its festival circuit run and it is time for us to find out why.

It is going to be a clash between real-life sweethearts, Rajkummar Rao and Patralekhaa, on April 20. After the deliciously bad Love Games that came out in 2016, Patralekhaa returns with this light-hearted supernatural comedy. Like her, even Abhay Deol returns on the screen after a gap of two years. The trailer was hilarious with Manu Rishi's lines hitting the sweet spot.

Though we have seen quite a few versions of Sarat Chandra's doomed hero, including Shah Rukh Khan's popular version and Anurag Kashyap's stoned one, Sudhir Mishra has a new take to give - a reverse Devdas. And he has some fine talent in the cast, which also include Saurabh Shukla, Vineet Kumar Singh, and Anurag Kashyap, in this political thriller.

We have never had a good spoof movie in Bollywood for some time, so can High Jack change that? The directorial debut of Akarsh Khurana, the movie takes its inspiration from Hollywood classic Airplane! and sets its premise inside an aeroplane that is taken over by some dim-witted hijackers who has the silliest of reasons to do so.

Any bets on which movie will back out of the rat race? Or for the matter, which movie do you think will trump the rest, both critically and commercially?

(The above story first appeared on LatestLY on Apr 03, 2018 05:44 PM IST. For more news and updates on politics, world, sports, entertainment and lifestyle, log on to our website latestly.com).