Janhvi Kapoor and Kartik Aaryan who will be seen together in Dostana 2 have taken social media by storm. As their Goa vacation pictures are all over the internet, making fans wonder what's cooking between the two. Check it out. 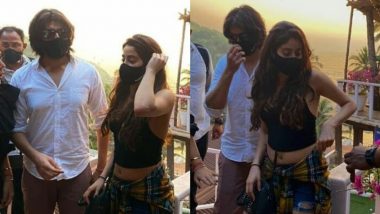 Earlier this week, Kartik Aaryan and Janhvi Kapoor were clicked at the Mumbai airport wherein the two were back to the bay from their mini Goa trip. Now, after a few days, the pair's photos from their getaway has gone viral on the internet. With this fans are also wondering what's cooking between the two. Netizens are sure that the two are dating, however, nothing as been officially confirmed yet. Even there is no clarity on whether Kartik and Janhvi were in the beachy locale to shoot for Dostana 2 or on a trip. This Picture of Janhvi Kapoor and Kartik Aaryan Together Will Make Sara Ali Khan Jealous.

In the viral photos, the newly rumoured couple of the tinsel town is surrounded by their fans. While Kartik can be seen wearing a white shirt paired with cargo pants, on the other hand, Janhvi looks pretty in a black crop top and blue denim shorts. The two also can be seen following the COVID-19 rules and wearing a mask in public. As soon as these pics were all over the internet, it surely has added fuel to the fire. Lakme Fashion Week 2020 Summer/Resort: Janhvi Kapoor and Vicky Kaushal Set the Fashion Ball Rolling for the New Season (View Pics).

Check Out Kartik and Janhvi's Pics Below:

However, Janhvi and Kartik were not alone, as they were joined by the former's sister Khushi Kapoor in Goa. For the one's unaware, Dostana 2 will see Janhvi and Kartik for the first time together in a flick. Helmed by Collin D'Cunha, it also marks the Bollywood debut of Lasksh Lawani. Stay tuned!

(The above story first appeared on LatestLY on Jan 08, 2021 03:54 PM IST. For more news and updates on politics, world, sports, entertainment and lifestyle, log on to our website latestly.com).