Nayanthara had played the titular role in this Nelson Dilipkumar directorial and looks like Janhvi Kapoor is all set to step into her shoes in the Hindi remake of Kolamaavu Kokila. 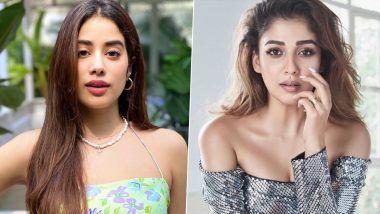 Kolamaavu Kokila is the Tamil film that released in 2018 starring Lady Superstar Nayanthara in the lead. Written and directed by Nelson Dilipkumar, this film had opened to positive response and had also become a commercial success. Nayanthara had played the titular role in this flick and looks like Janhvi Kapoor is all set to step into her shoes in the Hindi remake of Kolamaavu Kokila. There has been no official announcement yet, but reports are rife that the Hindi adaptation of Kolamaavu Kokila will feature late actress Sridevi and producer Boney Kapoor’s daughter as the leading lady. Nayanthara's Kolamaavu Kokila Catches Karan Johar's Attention; Leaves Rajinikanth Impressed.

As per a report in Mid-Day, the shooting of this yet-to-be titled film, which will be helmed by Siddharth Sengupta, will go on floors from January 9. A source revealed to the tabloid, “Janhvi will fly to Punjab for the film which will be shot over 45 days in a (bio) bubble. They roll on January 9, and plan to shoot across various regions. Even though in each location, a different set of restrictions are imposed, strict safety protocol will be maintained.”

The source also mentions that the Hindi remake of Kolamaavu Kokila will not be exactly the same as the original film. Talking about Janhvi Kapoor’s look and her role, the source further elaborated, “Playing the part of a girl from a simple, middle-class family, she will be seen in braids and salwar-kurtas. It is also a coming-of-age movie of a girl who gets trapped in an extraordinary situation, and how she saves her family. In the process, she emerges resilient. There are a few action sequences for which Janhvi has been prepping.” Gunjan Saxena: The Kargil Girl - Hrithik Roshan Praises Janhvi Kapoor's Film Calling It Outstanding.

We just cannot wait for the makers to share an official announcement on the same and share Janhvi Kapoor’s look in the film. Meanwhile, the other projects that Janhvi has in her kitty include Roohi Afzana, Takht and Dostana 2.

(The above story first appeared on LatestLY on Jan 03, 2021 08:55 AM IST. For more news and updates on politics, world, sports, entertainment and lifestyle, log on to our website latestly.com).