Director Gowtam Tinnanuri's Jersey narrates the story of a failed cricketer, played by Shahid Kapoor, who tries to resurrect his career to regain respect in the eye of his loved ones. The film also stars Pankaj Kapur and Mrunal Thakur in the lead roles. 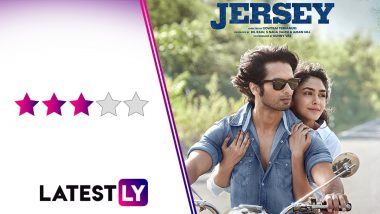 Jersey Movie Review: Shahid Kapoor takes guard with the charm and the swagger that guarantees results. His stance is praiseworthy. His foot movement is impeccable, and the way he middles the ball from the juiciest spot of the willow indicates the intensity as well as the integrity that has gone into constructing the cricketer he has portrayed in this one. Pankaj Kapur, who plays Shahid's coach and mentor in the film, proves once again why he continues to be the ever-so-dependable performer. The real-life father-son duo joins forces to give us some really heart-wrenching as indeed some remarkable inspiring moments in Jersey. Their partnership truly sparkles in a game that remains largely predictable. Jersey Movie: Review, Cast, Plot, Trailer, Release Date – All You Need to Know About Shahid Kapoor and Mrunal Thakur’s Sports Drama!

The masterstroke here comes straight from Shahid's bat as he plays a failed cricketer (Arjun Talwar) desperately trying to resurrect in order to regain self-respect in the eye of his loved ones. Sasha makes a clear distinction between his on-field swagger and his off-field vulnerabilities. It's almost as if he is playing two different personas in the same film each with its own roaring strengths and glaring weaknesses. And the actor simply hits it out of the park as he makes the switch with absolute ease. The senior Kapur, on the other hand, brings in much maturity, subtleties, and humour with his supreme command over the craft. (Watch his body language and note the modulation in his voice as the narrative takes a generation leap in the climax, and you will understand why Pankaj is such a gem of a talent that has remained largely underutilized by filmmakers in general) Jersey Producer Aman Gill Explains Why Release Date of Shahid Kapoor and Mrunal Thakur’s Film Was Changed

The film, though majorly a breezy watch, resorts to some predictable tropes and emotional gimmicks that you have seen in at least a dozen of other films. Certain moments are stretched beyond a limit and emotions are exploited for sheer effects. Minus these manipulative gimmicks, Jersey would have been a crisp watch. The film has its heart at the right place, just like the original version Naani was applauded for, but it also has its own inherent flaws.

There are some huge pluses here. What really works are the cricket matches thanks to Anil Mehta's brilliant camerawork. The screenplay remains rather tight and the sequences are strung well with the emotional upheaval in Arjun's journey to glory.  Some sequences feature unusual camera tracking of the events on the field: A catch completed at mid-on or a dive made to save a cheeky single-these frames give you the thrill of watching a live match. Shahid Kapoor’s Impeccable Style and Charming Demeanour Are on Display in His Latest Filmfare Photoshoot (View Pics)

What has remained largely undercooked is Sasha's chemistry with his girlfriend-turned-wife. In fact, Arjun's equation with his son is unidimensional and doesn't dare to go beyond the typical father and son trajectory.  The zone has its emotional strength, but it lacks the much-needed playfulness or clever banter to make that relationship enjoyable or even real. Theatrical Releases Of The Week: Shahid Kapoor’s Jersey, Sharad Kelkar’s Operation Romeo, Edris Elba’s Sonic The Hedgehog 2 & More

Mrunal Thakur has done her best in a narrative that doesn't offer her much to do in terms of variations. Her emotional graph has not been much experimented with, so she gives a cliched response to her husband's topsy turvy ride. Jersey works in many places as it has some really feel-good moments that restore your faith in the sportsman spirit and in life in equal measures. Sidharth-Garima's dialogues are both real and relatable while Sachet Parampara's background score lifts the mood of the film.

Guilty as charged, I have not watched the original film but that also helped me stay away from unwanted comparisons or unnecessary parallels that get drawn largely due to influence.

Jersey reiterates Shahid Kapoor's strength as a performer as it also celebrates the gem of an actor that Pankaj Kapoor is. Whether you are a cricket aficionado or not, the two will bring a smile to your face with their fine masterstrokes.

(The above story first appeared on LatestLY on Apr 21, 2022 10:12 AM IST. For more news and updates on politics, world, sports, entertainment and lifestyle, log on to our website latestly.com).