Karan Johar Birthday Special: Picking One Best Scene From All the Movies KJo Has Directed in Two Decades!

In a directorial career spanning over 21 years, Karan Johar has made only six feature-length films. 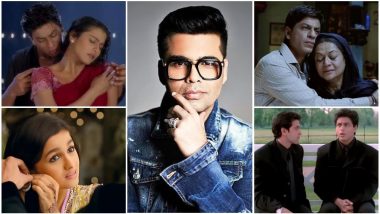 Karan Johar Birthday Special: Picking One Best Scene From All the Movies KJo Has Directed in Two Decades!

One of the most popular film-makers in Bollywood is turning 47 today. Karan Johar is celebrating his birthday on May 25, and we take this opportunity to wish him Many Many Happy Returns of the Day! Karan Johar is one of the biggest brands and the most influential figures in Bollywood right now. The owner of Dharma Productions, arguably the biggest production house in Bollywood right now, is a multi-faceted personality. He is a director, he sometimes acts too. Karan Johar also takes upon himself at launching some talented star-kids (earning the tag of nepotism king). He is also a popular talk show host and emcee, while also hosting a radio show too. Karan Johar Birthday Special: His Colourful Wardrobe Should be a Bible for all the Men Out There.

But in this feature, let's talk about the films Karan Johar had made. The director had a high profile debut in 1998 with Kuch Kuch Hota Hai. The movie was a huge hit and launched Karan's career in a big way, while also making his production house into a huge banner. For his second film, Kabhi Khushi Kabhie Gham, Karan Johar managed an enviable casting coup with Amitabh Bachchan, Jaya Bachchan, Shah Rukh Khan, Kajol, Hrithik Roshan and Kareena Kapoor in the lead.

In a directorial career spanning over 21 years, Karan Johar has made only six feature-length films (and two shorts in Bombay Talkies and Lust Stories). But all these films have been hits, if not blockbusters, making Karan Johar one of the few film-makers with a 100% success rate. After Koffee With Karan 6, Karan Johar and Kajol to Share the Couch at the Kapil Sharma Show.

Here, we pick our choice of one best scene from every feature-length film that Karan Johar has made and explain why we loved that sequence for KJo's mastery.

The Scene: The Rain Dance

It is always great to see Shah Rukh Khan and Kajol together on screen, but there are some moments between them that are pure magic. Like this beautiful romantic dance sequence between the two, that starts on a playful note but soon turns into a sensual moment.

Despite the competitive vibes between Shah Rukh Khan and Hrithik Roshan, both the stars share a comfortable sense of bonhomie. This is best played when Rahul finally realises the paying guest in his house is none other than his younger brother, Rohan. The conversation they have on a park bench is a lovely callback to their last meeting in a similar setting years ago.

The Scene: The Narrow Escape

Karan Johar is terrific at crafting scenes that has visuals speak more than words. Kabhi Alvida Naa Kehna is KJo's most underrated effort, a movie that delves into intricacies of relationships not bound by marriage. As the two leads, played by Shah Rukh Khan and Rani Mukerji, enter in a forbidden relationship, it leads to some very tense moments. Like the above almost-heartstopping scene.

My Name is Khan

My Name is Khan is, in my humble opinion, the best film that Karan Johar has directed. The film has terrific turns from Shah Rukh Khan and Kajol, and many heart-rending and touching. One such scene is when SRK's Asperger's Syndrome-afflicted Rizwan Khan is asked to speak in a church. He takes the opportunity to talk about his dead stepson, for whom he has gone on a country-wide stroll to meet US President. Shah Rukh Khan is simply superb in the scene and he will leave your eyes moist.

Student of the Year

The Scene: The Silent Sequence

Student of the Year is Karan Johar's weakest film (though compared to its sequel, the movie is a masterpiece). While the bubblegum narrative is more about polishing the abs and the curves of the leads, Karan Johar does manage to include some of his masterful strokes in here. Like this beautiful sequence between Alia Bhatt, Varun Dhawan and Sidharth Malhotra, where there isn't any dialogue but the scene speaks a lot through the leads' actions.

What turns out to be a meeting of exchanging pleasantries and making introductions turns out to be a mirror of truth for all the players involved. Saba realises that her best friend has still not gotten over her, and Alizeh understands her new lover may never be hers.

(The above story first appeared on LatestLY on May 25, 2019 08:02 AM IST. For more news and updates on politics, world, sports, entertainment and lifestyle, log on to our website latestly.com).