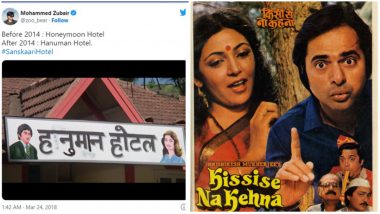 If you are seeing the late filmmaker Hrishikesh Mukherjee's 1983 film Kissi Se Na Kehna trending on social media, it has a lot to do with a high profile arrest that happened recently. Alt News co-founder Mohammed Zubair was arrested on June 27. As per Delhi Police's FIR, Zubair was arrested for a tweet that was "highly provocative and more than sufficient to incite feeling of hatred". The arrest was based on a complaint by a Twitter user who claims to be a Hanuman bhakt, and the action against the fact-checker has been done based on that. However, there has been a huge outrage over the arrest, and the circumstances in which it has been carried out, especially the basis on which the case has been registered. Mohammed Zubair, Alt News Co-Founder, Arrested by Delhi Police for Allegedly Hurting Religious Sentiments.

So what has this arrest to do with Kissi Se Na Kehna? In 2018, Zubair had tweeted the below from his handle, which was seen as 'highly provocative and more than sufficient to incite feeling of hatred' as per the FIR, strangely, after four years of the tweet.

In the image with the tweet, there is a hotel board that once used to read 'Honeymoon Hotel' in Devanagari script, but now reads as 'Hanuman Hotel' after a missing sign and certain 'modifications'.

The interesting part about this image is that it is not something Mohammed Zubair, who is known for busting fake news especially from the right wing sources, has made up on his own. The image is a still from Kissi Se Na Kehna, which many of Zubair's supporters are pointing out on Twitter, while asking if the late Hrishikesh Mukherjee would also be arrested for the same. Sardar Udham: Before Vicky Kaushal's Film, Did You Know Hrishikesh Mukherjee Tried to Make a Movie on The Revolutionary? Here's What Happened to It!

See the tweets below:

AltNews Cofounder Mohammed Zubair @zoo_bear has been arrested for posting SNAPSHOT from this movie!! Kissi se na kehna 1983. Director Hrishikesh Mukherjee had escaped prosecution, because he died in 2006! pic.twitter.com/ORbegw5gSb

Screengrab of the Movie

Quite Possible in This Era

Good heavens! Will Sanghis arrest #HrishikeshMukherjee too? I just saw a screenshot of the tweet for which #MohammedZubair was arrested - it's from Hrishida's 1983 film #KissiSeNaKehna *ing Deepti Naval, Farooq Shaikh 🤦🏽 FYI the film's on YouTube &Amazon Prime. #IStandWithZubair pic.twitter.com/amnUL8C1oH

The Filmmaker Would Be Rolling in His Grave

Delhi Police got the wrong guy. They wanted to arrest Hrishikesh Mukherjee but instead arrested @zoo_bear for posting a screenshot of his film "Kissi Se Na Kehna" released in 1983. 😂😂😂

What a Joke entire state machinery & Delhi Police has been turned into! #IStandWithZubair pic.twitter.com/NjdKgRgU8b

The whole country is laughing at this @DelhiPolice

Kissi Se Na Kehna was a social comedy that starred Farooque Shaikh, Dipti Naval, Utpal Dutt, Saeed Jaffrey and Deven Varma. If you want to watch the film, it is available on Amazon Prime Video and YouTube.

(The above story first appeared on LatestLY on Jun 28, 2022 02:02 PM IST. For more news and updates on politics, world, sports, entertainment and lifestyle, log on to our website latestly.com).