Produced by Aamir Khan Productions, Kiran Rao, and Viacom18 Studios, Laal Singh Chaddha is slated to hit the screens on August 11, this year. Here's all you need to know about the film. Read on! 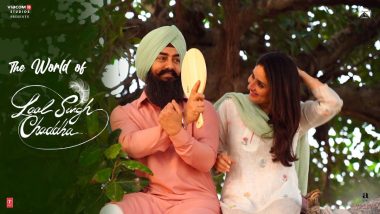 Aamir Khan's much anticipated project Laal Singh Chaddha is all set to release on the big screens this August. Helmed by Advait Chandan, the movie has a lot of expectations attached to it as it stars Mr Perfectionist of Bollywood. The movie's posters, teaser and trailer have already made fans curious. Having said that, fyi, LSC is an official Hindi remake of Hollywood's iconic film Forrest Gump (1994). Laal Singh Chaddha is produced by Aamir Khan Productions and Viacom18 Studios. Laal Singh Chaddha First Reviews Out! Aamir Khan, Kareena Kapoor Khan’s Forrest Gump Remake ‘Stands on Its Own’, Say Critics.

Now, ahead of the film's release at the theatres. Here are all the things you should know about Aamir Khan's Laal Singh Chaddha. Laal Singh Chaddha: Find Mona Singh’s Casting As Aamir Khan’s Mother ‘Problematic’? Tom Hanks’ Forrest Gump Also Did Something Similar!

Plot - With AK as the lead hero, the film has to be superhit which revolves around the actor playing a simple Sikh man whose extraordinary journey will fill audiences with love, warmth, happiness and also make them laugh.

Release Date - Aamir and Kareena's much hyped Laal Singh Chaddha is scheduled to release at the big screens on August 11, which marks the occasion of Raksha Bandhan.

Review - Laal Singh Chaddha's reviews are not out yet. LatestLY will update you as soon as the reviews make it online. Stay tuned!

(The above story first appeared on LatestLY on Aug 10, 2022 12:29 PM IST. For more news and updates on politics, world, sports, entertainment and lifestyle, log on to our website latestly.com).