Today is Lara Dutta's birthday and we found a blast from the past video of the actress that might make Kedarnath director Abhishek Kapoor chuckle. This is a music video from yesteryear where Lara is teamed up with Kapoor. 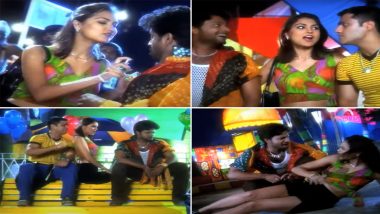 Lara Dutta is the second person from India who was crowned Miss Universe in 2000. As expected, she followed it up with an acting stint where the actress did some credible roles. Her debut happened with Priyanka Chopra and Akshay Kumar in Andaz. But before that, the actress was seen in a music video with none other than the Kedarnath director Abhishek Kapoor. Yes, you read right. It has Kapoor playing a tapori with a host of others. Lara is Sonia who steals every guy's heart. The song was sung by Abhijeet Bhattacharya. Before Priyanka Chopra in The Matrix 4, Did You Know Lara Dutta Was Approached for the Original Trilogy?

Lara has always been a wise, intelligent and charming woman. During the Miss Universe pageant, she apparently created history by scoring the highest points ever. She anyway topped the swimsuit round and later in the finale interview section, she got the highest votes from the judges. Such a wonderful woman! Lara Dutta Recalls How Hometown Bengaluru Welcomed the Actress After Her Grand Miss Universe Win (View Post)

Check out the music video

Lara Dutta will be reuniting with her first male co-star Akshay Kumar in Bell Bottom. The film has already been shot and we are excited to watch her in movies once more.

(The above story first appeared on LatestLY on Apr 16, 2021 07:10 PM IST. For more news and updates on politics, world, sports, entertainment and lifestyle, log on to our website latestly.com).