Nick Jonas is reminiscing about Sucker which completes a year and we can't get over the BTS pictures he shared. They are such a mood! 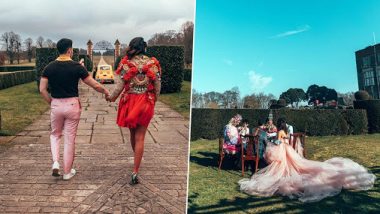 Jonas Brothers returned as a band and released Sucker. It was an instant hit and they regained their fandom. The song was even more special because all the three brothers had their spouses/girlfriend in it. So there was Nick Jonas and Priyanka Chopra, Joe Jonas and Sophie Turner, Kevin and Danielle Jonas. It was quite an outlandish and overindulgent music video but the track caught up real quick. It even won a VMA for Best Pop Song. A year later, Nick fondly reminisces about how it all happened and we loved it. Nick Jonas Says 'It's Cool' Reacting to the 10-Year Age Gap With Wife Priyanka Chopra

Nick shared two pictures from the shoot. In one, he is walking hand-in-hand with PC and in another, everyone is sitting around a table in their costumes. They make for such a happy picture.

We've had so many ups and downs as a band & today as we're all sitting here reflecting on the last year, we can't help but realize how lucky we are. We have the best fans in the world and we get to do all of this as a family?! Happy 1 Year to you guys and we love you all. Thank you!

Sucker had raked over 200 million views to date and Nick has credited the success to the wives. Speaking to People, he had said, "We knew that context needed to be given about where we are now. And I think the biggest piece of that puzzle is those three incredible women who stand by our side. And they stole the show in our video."

(The above story first appeared on LatestLY on Feb 29, 2020 11:50 AM IST. For more news and updates on politics, world, sports, entertainment and lifestyle, log on to our website latestly.com).