Filmmaker Ashwiny Iyer Tiwari has a problem with the oft quoted saying "Behind every successful man, there is a woman" as she believes that in a largely patriarchal society, the line only reinforces the notion that a woman is supposed to give priority to her household. 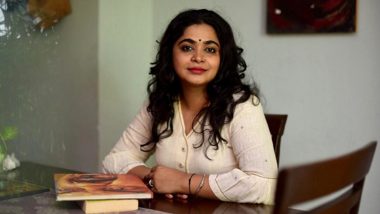 Filmmaker Ashwiny Iyer Tiwari has a problem with the oft quoted saying "Behind every successful man, there is a woman" as she believes that in a largely patriarchal society, the line only reinforces the notion that a woman is supposed to give priority to her household. The filmmaker, who is the force behind critically-acclaimed movies such as "Nil Battey Sannata" and "Bareilly Ki Barfi", says patriarchy is so deep-rooted in the society that a woman has constant guilt trips the moment she steps out to achieve her dreams. Kangana Ranaut’s Back to Back Ethnic Styles for Panga Promotions Are Poetic and Minimalist Chic!

"There are so many stories. Some women have house help or in-laws or parents or a supportive husband but most of them do not have any kind of help. It is a guilt that comes in place, you always feel you need to be there for your family. "It is very patriarchal and societal when it is said that 'behind every man, there is a woman' as she takes care of the house and does everything else, whereas a man can go out and work," Ashwiny told PTI in an interview.

The filmmaker has tried to present one such story through her next Panga, which features Kangana Ranaut as Jaya Nigam, a national-level Kabaddi champion who aims to make a comeback to the sport. Panga Star Kangana Ranaut Recalls Encounter with Dacoits in Chambal While Filming for Revolver Rani

Ashwiny says there is a hidden dream in every woman to achieve something but the guilt gets in the way. "It is a guilt thing. If they want, they could follow their dreams. I have been rotating since last few days as I am busy with my film but I am feeling guilty (of not being there for my kids). It is inherent, it is so ingrained in our system that it seems you are doing something wrong." Punjabi singer-actor Jassi Gill is portraying husband of Jaya, who pushes her to pursue her dreams. Ashwiny says she hopes after "Panga" things change.

"Maybe after 'Panga', I hope the new thing can be, 'Behind every woman, there is a man'. The perception, the notion should change. We are not superwoman, they look good in movies. We need to have the whole idea of co-existence and co-parenting." The first trailer of "Panga" was able to distinguish the movie from sports dramas of recent times that are dominated by shots of athletes training hard and adrenaline-fueled sequences of on-court battles.

Ashwiny asserts she wanted to make a film that is a1/19/2020 5:00:48 PM blend of her staple slice-of-life story and sports drama. "If the story resonates, then no amount of budget or camera work or technical aspect will ever overshine than the characters and the story. The kind of stories I want to tell, they don't need too much of great camera work. In 'Panga' it is a mix of both. It is a slice-of-life sports drama.

"I had to maintain a great balance between slice-of-life portion and sports. Every sports film has lots of grittiness and aggression, I couldn't show two films in one. With sports film, it is like you need good camera work but I had to bridge the gap between slice-of-life and Kabaddi." The director says the idea was to shoot and show the aspect of sports in a different way in her film.

"I was tired of watching sports films which are done only in a certain way, where it is about aggression, grittiness, dark shots, sweat and there is nothing wrong in it. Everyone has their own way of making a film. But in 'Panga' I felt to do it this way." Panga, which also features Neena Gupta and Richa Chadha, is slated to release on January 24.