Pathan: Dimple Kapadia To Play The Role Of A RAW Agent In Shah Rukh Khan Starrer?

Veteran actress Dimple Kapadia who was last seen in Christopher Nolan’s film Tenet is now reportedly set to play a key role in Pathan that stars Shah Rukh Khan in the lead. 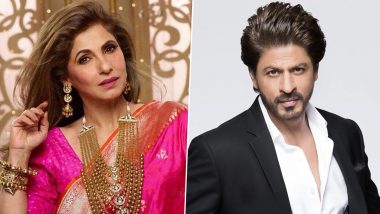 Veteran actress Dimple Kapadia who was last seen in Christopher Nolan’s film Tenet is now reportedly set to play a key role in Pathan. According to a report in a leading tabloid, Dimple would be seen playing the role of a RAW agent in this espionage thriller in which Shah Rukh Khan is playing the lead role. The report further suggests that the veteran actress of Hindi Cinema has also started shooting for this upcoming project. However, there have been no official update on it yet. Salman Khan to Have a 15-Minute Cameo in Shah Rukh Khan’s Pathan, Superstars to Shoot in Dubai for the Espionage Thriller!

Talking about Dimple Kapadia starring in Pathan, a source revealed to Mid-Day, “Dimple has been flooded with offers post her appearance in Tenet. She loved the script of Pathan and immediately agreed to be part of the film. She plays a RAW (Research & Analysis Wing) officer who helps Shah Rukh’s undercover agent in his mission. She has a 20-day schedule in Mumbai.” If the reports are to be believed, then it would be intriguing to watch her share screen space once again with King Khan. Pathan: Shah Rukh Khan Reportedly Starts Shooting for his Next Actioner With Deepika Padukone and John Abraham.

Pathan, helmed by Siddharth Anand, whose last directorial project was War, will also feature Deepika Padukone and John Abraham in the lead. Produced under the banner of Yash Raj Films, the latter would be seen as the antagonist.

(The above story first appeared on LatestLY on Dec 17, 2020 09:20 AM IST. For more news and updates on politics, world, sports, entertainment and lifestyle, log on to our website latestly.com).