Sharing a picture of the martyrs, Akshay wrote in his tweet that India we will always remain indebted for their supreme sacrifice. Kartik also shared the same picture. 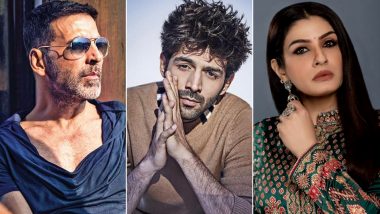 Back in 2019 on this day, India suffered a major loss when a CRPF convoy was attacked in Jammu and Kashmir's Pulwama district. It killed 40 soldiers on the spot and the incident shook the people of the country to the core. Today it will be two years since this attack took place and people all around India are remembering the Pulwama attack martyrs and paying their due. Joining the bandwagon, we saw many Bollywood celebrities also pay homage to the brave hearts who lost their lives after terror group Jaish-e-Mohammad's attack. Pulwama Attack: Gloom, Anger Across India as Country Bids Teary Adieu to CRPF Martyrs.

Akshay Kumar, Kartik Aaryan, Rajkummar Rao, Raveena Tandon were amongst the many stars who took to social media to remember our soldiers. Sharing a picture of the martyrs, Akshay wrote in his tweet that India we will always remain indebted for their supreme sacrifice. Kartik also shared the same picture and paid his due respect to the martyrs. Raveena, Rajkummar also wrote strong messages, remembering the brave souls. Suniel Shetty, Riteish Deshmukh, Sidharth Malhotra, Madhur Bhandarkar also paid their tributes to the Indian soldiers.

Remembering our bravehearts of #PulwamaAttack, we will always remain indebted for your supreme sacrifice 🙏🏻 pic.twitter.com/WLGQ1QJqIX

#PulwamaAttack के शहीदों को नमन🙏 On this day, 2 years back 40 soldiers sacrificed their lives for our nation in Pulwama attack. Prayers for the brave souls and their families. We'll always be in debt of yours 🇮🇳🙏 pic.twitter.com/wU0NDDmkTN

A salute to the brave hearts who sacrificed their life in the line of duty on this day. #PulwamaAttack

I bow my head down in respect for our brave soldiers who laid down their lives at Pulwama to keep us safe. We will never forget their supreme sacrifice, we stand in solidarity with our armed forces. Jai Hind 🇮🇳#pulwamaattack pic.twitter.com/EJ7VE19dzv

India will Always Remember Your Sacrifice In #PulwamaAttack#JaiHind ✊🇮🇳 pic.twitter.com/Vra2neTIuo

For the uninitiated, a suicide bomber rammed an explosive-laden vehicle into the bus during the attack. The convoy had 78 buses in which around 2,500 personnel were travelling from Jammu to Srinagar. Prime Minister Narendra Modi also paid homage to CRPF personnel and said, "No Indian can forget this day. Two years ago, the Pulwama attack happened. We pay homage to all martyrs we lost in that attack. We are proud of our security forces. Their bravery will continue to inspire generations." The Prime Minister was speaking after inauguration and foundation stone laying ceremony of several key projects in Chennai. Pulwama Attack: 2-Minute Silence Observed for CRPF Martyrs in Odisha Schools.

(The above story first appeared on LatestLY on Feb 14, 2021 05:16 PM IST. For more news and updates on politics, world, sports, entertainment and lifestyle, log on to our website latestly.com).