Two days after the terror attack on security forces in Jammu and Kashmir, the nation was wrapped in mourning over the loss of 40 lives in Jaish-e-Mohammed strike in Pulwama. 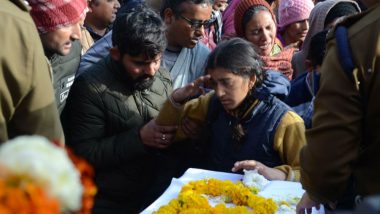 Daughter of Mohan Lal, one of the 49 CRPF personnel killed in 14 Feb Pulwama militant attack salutes her father during his last rites (Photo Credits: IANS)

New Delhi, Feb 16: A pall of gloom combined with anger and patriotic fervour was witnessed across the country on Saturday as the tricolour-bedecked mortal remains of the CRPF troopers, killed in the Pulwama attack, reached their homes and last rites conducted with full state honours. Two days after the terror attack on security forces in Jammu and Kashmir, the nation was wrapped in mourning over the loss of 40 lives in a suicide attack by a Jaish-e-Mohammed activist at Avantipora near Srinagar and demands for "avenging" the attack cropped up strongly.

Emotions poured out on the streets during the last rites of four troopers from Punjab -- Jaimal Singh of Kot Ise Khan village in Moga district, Sukhjinder Singh of Gandiwind village in Tarn Taran, Maninder Singh Attri of Dinanagar town in Gurdaspur and Kulwinder Singh of Rouli village in Ropar. Pulwama Attack Fallout: India Retaliates With Higher Customs Duty on Goods Imported From Pakistan.

The Central Reserve Police Force (CRPF) contingents gave a guard of honour to the four martyrs ahead of last rites, attended by ministers, political leaders and local officials along with hundreds of people who raised slogans in support of the CRPF and against Pakistan. Villagers and family members vented their anger and demanded that the government should avenge the deaths and give a befitting reply to the Pakistan-backed terrorists.

Jaimal Singh, 44, was driving the bus that was blown up in the attack. He leaves behind ageing parents, wife, a 10-year-old son and a younger brother. Sukhjinder Singh left behind parents, wife and a seven-month-old son, born after a gap of eight years. Kulwinder Singh was to get married this year.  Maninder Singh had joined the duty on February 13. His younger brother is also serving in the CRPF and is posted in Assam now. Pakistan Violates Ceasefire in Rajouri Two Days After Pulwama Attack, One Jawan Injured.

In Himachal Pradesh, the last rites of CRPF trooper Tilak Raj were held at Jandro village in the Kangra district, in the presence of Chief Minister Jai Ram Thakur, Union Health Minister J.P. Nadda, local MP Shanta Kumar and hundreds of villagers. Consoling the martyr's father Layak Ram, mother and other family members, the Chief Minister said Tilak Raj laid down his life for the nation. He assured the family that the state government was with them in their time of grief. His brother Baldev Singh lit the pyre amid slogans of "Shaeed Tilak Raj Amar Rahe".

The 31-year-old Tilak Raj who had joined the CRPF in 2007 leaves behind parents, wife and two sons -- one aged two and the other only 15-day old. According to his friends and village residents, he was also a popular Himachali folk singer and kabaddi player. Sustained cries of 'Vande Mataram', 'Bharat Mata ki Jai' and 'Pakistan murdabad' rent the air as hundreds of people paid homage to the two CRPF troopers from West Bengal when their bodies reached Kolkata on Saturday. Pulwama Terror Attack: How CRPF Jawans Fell in JeM Trap.

Draped in the tricolour, the coffins carrying the mortal remains of head constable Bablu Santra and constable Sudip Biswas were flown in to the Netaji Subhas Chandra Bose International Airport. Union Minister Babul Supriyo, along with troopers from the Central Reserve Police Forces and other security forces, carried the bodies out of the airport, where people carrying the national flag, festoons and posters decrying the killings were waiting since the morning to pay their respects.

The coffins were placed on a makeshift platform outside the airport, as wreaths were laid and a guard of honour given by the CRPF. Three close relatives of Biswas, who had come all the way from Tehatta in Nadia, broke down on seeing the coffin. Odisha Chief Minister Naveen Patnaik, Union ministers Jual Oram and Dharmendra Pradhan, state ministers Sashi Bhusan Behera and Pratap Jena were present at the Biju Patnaik International Airport in Bhubaneswar to receive bodies of two troopers from the state.

Leaders cutting across party lines and senior police officials paid tributes as bodies of Manoj Kumar Behera of Ratanpur in Cuttack and Prasanna Sahu of Shikhar village in Jagatsinghpur district arrived in a special flight. Patnaik announced the ex gratia to their families has been increased to Rs 25 lakh from Rs 10 lakh, the state government will bear all education expenses of their children and the schools where Behera and Sahu studied would be named after them. The last rites of martyrs were held with full state honours at their native places.

According to his relatives, Guru had joined the CRPF in 2011. Kumaraswamy assured the bereaved family of providing a government job to Guru's widow and the state government announced Rs 25 lakh financial assistance.

The mortal remains of troopers -- G. Subramanian and C. Sivachandran -- arrived in Tamil Nadu on Saturday. Chief Minister E. K. Palaniswamy said the government would provide jobs to each of the kin of martyrs. Defence Minister Nirmala Sitharaman paid her last respects to Sivachandran at the Tiruchirappalli airport, while Union Minister Pon Radhakrishnan laid a wreath on Subramanian's body as it reached Madurai airport.

Bihar Chief Minister Nitish Kumar and other leaders were present as bodies of troopers Ratan Kumar Thakur of Kahalgaon in Bhagalpur district and Sanjay Sinha of Masaurhi in Patna district, reached Patna. Last rites were later held at their native places with full state honours.

Union Tourism Minister K.J. Alphons, Kerala Ministers E.P. Jayarajan, A.K. Saseendran and K.T. Jaleel and several lawmakers were present at the Kozhikode airport, when the mortal remains of havaldar V.V. Vasanth Kumar was brought by a special flight. After a guard of honour, it was taken by road to his home town in Wayanad for the last rites. Alphons and Saseendran were present.

The convoy stopped at Kozhikode where hundreds paid their last respects, before it was taken to his home and then to the LP School at Lakidi for locals to pay their respects before the last rites. Vasanth Kumar is survived by mother, wife, an eight-year-old daughter and a four-year-old son.

(The above story first appeared on LatestLY on Feb 16, 2019 11:46 PM IST. For more news and updates on politics, world, sports, entertainment and lifestyle, log on to our website latestly.com).