Meanwhile, thousands of people assembled at the Biju Patnaik International Airport here to receive the mortal remains of the two martyrs. 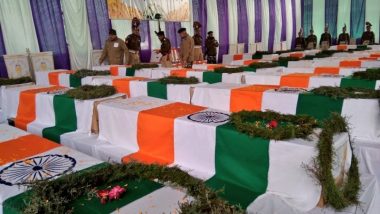 Bhubaneswar, February 19: Thousands of School and college students along with their teachers and staff Saturday observed two-minute silence as a mark of respect to the CRPF jawans who were martyred in a terrorist attack at Pulwama in Jammu & Kashmir. Chief Minister Naveen Patnaik had on Friday appealed to all the educational institutions across the state to hold silent prayers in the honour of the slain jawans.

Two jawans from Odisha Prasanna Kumar Sahu of Shikhar village in Jagatsinghpur district and Manoj Kumar Behera of Ratanpur village in Cuttack district were among the 40 martyred CRPF personnel. The Odisha government has announced an ex-gratia of Rs 10 lakh each for the families of the two CRPF jawans from the state. List of Jawans Martyred in Pulwama Attack: Names and Photos of 40 CRPF Bravehearts Martyred in JeM Terror Strike in J&K.

Meanwhile, thousands of people assembled at the Biju Patnaik International Airport here to receive the mortal remains of the two martyrs. The Central Reserve Police Force (CRPF) also made elaborate arrangements to facilitate the people who came to pay homage at the airport.

As per the instructions given out by Prime Minister Narendra Modi, two Union ministers from Odisha -- Tribal Affairs Minister Jual Oram and Union Petroleum and Natural Gas Minister Dharmendra Pradhan -- would attend the cremation of Manoj Kumar Behera and Prasanna Kumar Sahu, respectively.