Rajkummar Rao To Star In Srikanth Bolla Biopic: All You Need To Know About The Visually Impaired Industrialist, Founder Of Bollant Industries

The dynamic industrialist, Srikanth Bolla, who was born visually impaired, his story would now be shown to the world through Rajkummar Rao. The actor has been roped in to play this major role in the upcoming biopic. 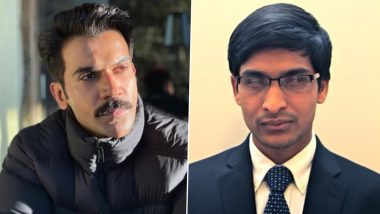 The dynamic industrialist, Srikanth Bolla, who was born visually impaired, his story would now be shown to the world through Rajkummar Rao. Yes, the National Film Award-winning actor has been roped in to portray the role of Srikanth Bolla, who has not had an easy journey right from his childhood due to his blindness. He has faced rejections and hardships were always there, but that never stopped him from working towards his dreams. Rajkummar Rao To Play Visually Impaired Industrialist Srikanth Bolla’s Role In The Biopic Helmed By Tushar Hiranandani.

The 29-year-old Srikanth Bolla was born to Damodar Rao and Venkatamma, a family of agriculturalists, in Seetharamapuram village. Although there were many who suggested his parents to leave their child at an orphanage due to his blindness, his family never gave up. Their son faced struggle, but they fought along with him. Srikanth reportedly had to fight the education system and the government to pursue science. He filed a case and was later granted to pursue the subject at his own risk. Srikanth scored 98% and topped in his class in the XII board exams. He wanted to crack JEE entry exam for which he approached IIT coaching institutes, but wasn’t enrolled due to his blindness.

Srikanth Bolla went ahead and applied at the Massachusetts Institute of Technology in Cambridge where he got selected and became the first international blind student of the esteemed institute. After completing his education, Srikanth was offered corporate opportunities in the US, however, he decided to return home and do something for his country. In 2012 he founded Bollant Industries in Hyderabad. The company, with funding from Ratan Tata, manufactures eco-friendly disposable products and packaging solutions. Differently-abled individuals are employed as the workforce of this organisation and trained on the job.

Srikanth Bolla About His Crafting His Future

In 2017, Srikanth Bolla was named in Forbes list 30 under 30 across Asia. His efforts over the years have been recognised for which he has even being conferred with prestigious awards. Some of the recognitions that he holds are Distinguished Youth Service Award, Emerging Leadership Award by ECLIF Malaysia – 2016, Business Line Young Change Maker Award 2018, Entrepreneur of the Year by One Young World – 2019, Young Global Leaders 2021 among others.

Proud to announce a biopic on the inspiring story of visually impaired industrialist, #SrikanthBolla. Starring @RajkummarRao & directed by #TusharHiranandani.

Srikanth Bolla’s life and never give up attitude is totally inspiring. His journey will now be showcased through the world of cinema. The biopic featuring Rajkummar Rao in the titular role will be helmed by Tushar Hiranandani and will be bankrolled by Bhushan Kumar, Krishan Kumar and Nidhi Parmar Hiranandani.

(The above story first appeared on LatestLY on Jan 06, 2022 01:01 PM IST. For more news and updates on politics, world, sports, entertainment and lifestyle, log on to our website latestly.com).