Box office all set to get all fiery and interesting with a string of clashes planned this year. It isn't just the local movies battling it out for screen space but Hollywood as well. From The Conjuring to Top Gun, the Hollywood-Bollywood clash officially begins in 2021. 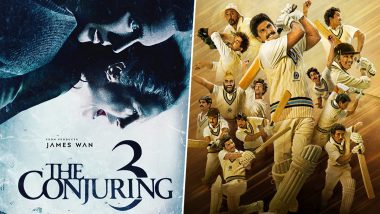 With the Central Government's decision to open theatres with 100% capacity, filmmakers have started to announce release dates of pending movies in a jiffy. In the last couple of days, dates of more than 10 movies have been announced which will hit the theatres in 2021. Along with it came many reports of clashes between biggies. It's not just the local movies but Hollywood too has jumped into the fray with a huge line-up of movies to contest for audience's attention. 83 which has taken the June 11 berth will go head-on with The Conjuring 3 one of the most successful horror franchises. The Conjuring 3 Will Expand the Franchise Beyond the ‘Haunted House Formula’, Reveals Screenwriter

These aren't the only movies jostling for space at the cinemas. July 2 is overcrowded with Shershaah, Major and now Tom Cruise's Top Gun. The traditional Independence Day weekend clash is back too with Pushpa and Attack.

Here are some more...

This is obviously good news after a year of no movies at the theatres. After several talks of movies going the OTT, this definitely comes as a respite for cinema halls.

(The above story first appeared on LatestLY on Feb 21, 2021 01:43 PM IST. For more news and updates on politics, world, sports, entertainment and lifestyle, log on to our website latestly.com).