Ajay Devgn, who is gearing up for his next film Runway 34, recently shared how the idea behind the film came into being. 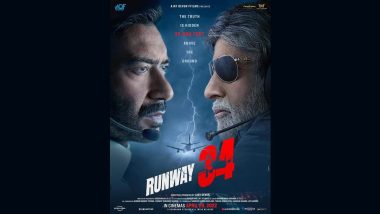 Ajay Devgn, who is gearing up for his next film Runway 34, recently shared how the idea behind the film came into being. The script of 'Runway 34', which will see Ajay doubling up as a director in addition to his portrayal of the lead character, was conceived during the first nationwide lockdown following the first wave of the pandemic in India. Runway 34: Amitabh Bachchan Reveals What Made Him Say ‘Yes’ To Be a Part of Ajay Devgn and Rakul Preet Singh-Starrer (Watch Video).

Talking about how the special journey of 'Runway 34' began, Ajay Devgn shared, "Two years ago, barely a month into the pandemic, when things seemed to be going slow, the writer-duo Sandeep Kewlani and Aamil Keeyan Khan narrated the script of 'Runway 34' to me. I liked the script but I wanted certain changes. As promised, they worked on it during the lockdown and came back to me with a refreshed version." Runway 34 Song Mitra Re: Ajay Devgn, Rakul Preet Singh’s Track in Arijit Singh’s Voice Is Soulful (Watch Video).

"In fact, each and every one of us will identify with the turbulence and that hollow feeling in the stomach when a flight hits an air pocket. I can't tell you more because it's a thriller and must be experienced." "Coming back to the script, Sandeep and Aamil had brought in the excitement and the drama. Then we worked on the script for another four months with my regular inputs. I was happy with the end result and also absolutely drawn to it.

I decided this would be my third directorial. In December, 2020, we launched the film and started to shoot it as soon as the lockdown was partially withdrawn. Here we are today with a film that I am truly proud to represent," he added. Directed by Ajay Devgn, 'Runway 34' is produced by Ajay Devgn Films and is co-produced by Kumar Mangat Pathak, Vikrant Sharma, Sandeep Harish Kewlani, Tarlok Singh Jethi, Hasnain Husaini and Jay Kanujia.

The film, which also stars Amitabh Bachchan, Rakul Preet Singh, Boman Irani, Aakanksha Singh and Angira Dhar, is set to hit theatres on April 29, where it will clash with Tiger Shroff and Nawazuddin Siddiqui-starrer 'Heropanti 2'.

(The above story first appeared on LatestLY on Apr 06, 2022 06:15 PM IST. For more news and updates on politics, world, sports, entertainment and lifestyle, log on to our website latestly.com).