So in this special birthday feature, we look at 20 such stars with whom Shah Rukh Khan get to share some special bromance on the screen. Ranking them in ascending order from WORST to BEST! 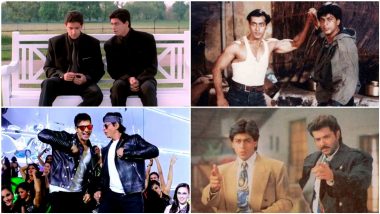 Enough with Shah Rukh Khan and how he can woo a women in style. Enough with how he makes romance so easy on screen, that he remains the benchmark when it comes to being a romantic hero. Let's talk about how he also makes bromance so easy to watch. While Shah Rukh Khan may have done very few multi-starrers, unlike an Ajay Devgn or Akshay Kumar or even Salman Khan (but more than Aamir), whenever he does a two-hero project or more, it has been memorable most of the times. Shah Rukh Khan Birthday Special: Five Actresses Whose Pairing With The Actor Left Us Wanting For More.

Shah Rukh Khan has worked with Salman Khan, Amitabh Bachchan, Anupam Kher, Arjun Rampal. Varun Dhawan, Abhishek Bachchan, among others. Not every time do we see the bromance, of course. Like for example, Amitabh Bachchan had acted with SRK in quite a few movies like Mohabbatein and Kabhi Khushi Kabhie Gham, but the movies don't offer much of an opportunity to establish a bromance. Or for the matter, Sunny Deol, who didn't like Shah Rukh Khan's character in Darr, nor for the matter, outside the film.

So in this special birthday feature, we look at 20 such stars with whom Shah Rukh Khan get to share some special bromance on the screen. Ranking them in ascending order from WORST to BEST! 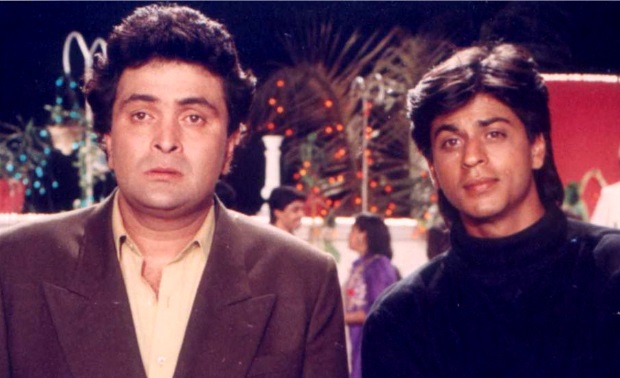 Although SRK and the late Rishi Kapoor did couple of movies together, the one film where they had equal level of playing was Deewana, which also happened to be SRK's first Bollywood release. While they did share a brief screentime together, the movie was more about their chemistry with the female lead, played by the late Divya Bharati. 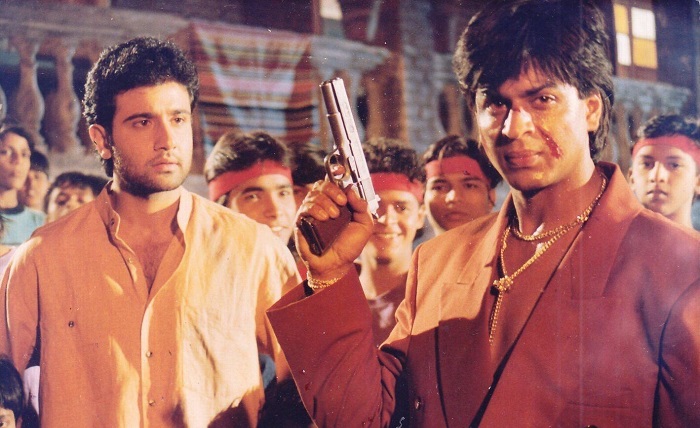 SRK and Vivek Mushran played friends in Ram Jaane who find themselves in the opposite sides of morality and a love triangle involving Juhi Chawla. So very less chance of a bromance there!

Like with Vivek Mushran in Ram Jaane, SRK's character Sunil finds himself in a love triangle involving Deepak Tijori's Chris in Kabhi Haan Kabhi Naa. They are in a band together, and are friends, but Sunil keeps on coming in between Chris and Anna. Which means that the actors don't get to develop much chemistry here. BTW, in Anjaam, SRK's character gets to brutally kill Deepak Tijori's, so there's that! Deepak Tijori Birthday Special: Did You Know He Is The Only Actor Who Stole Shah Rukh Khan's Love Interests Twice? 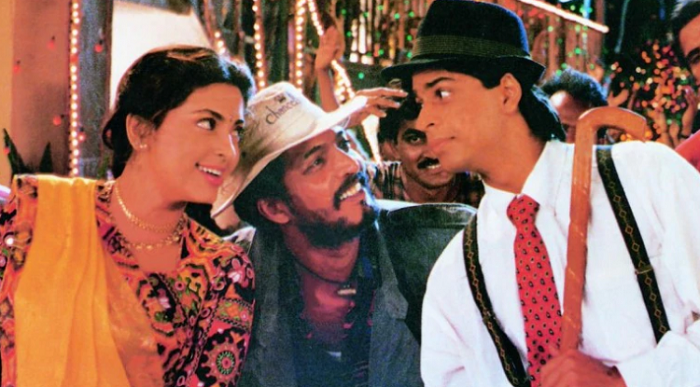 In Raju Ban Gaya Gentleman, Nana Patekar's character might be the friend of SRK's Raju, but he acted more like a catalyst and guide. And we also get to see very few scenes of them interacting together. 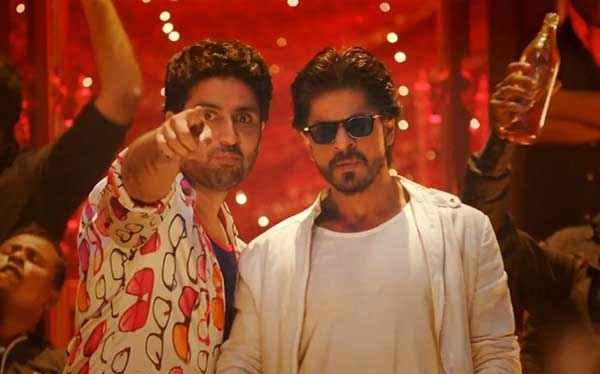 In Karan Johar's Kabhi Alvida Naa Kehna, there was little chance of SRK and Abhishek's characters in developing in bromance, as the former ends up in an extra-marital affair with latter's wife. The little bit of bromance that we see is in Farah Khan's Happy New Year, though it was more of a group bromance also involving Boman Irani, Sonu Sood and Vivaan Shah. Shah Rukh Khan Birthday: 7 Quotes by the Actor That Will Change Your Life! 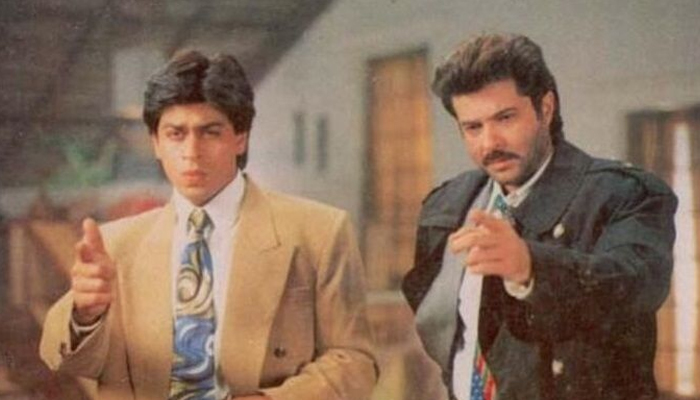 Anil Kapoor and Shah Rukh Khan only did one movie together as parallel leads - the late Mukul Anand's Trimurti, where Anil Kapoor played SRK's elder brother. While the movie is pretty forgettable (and SRK very hammy), it showed some fantastic camaraderie between both the actors, which for some strange reason, we never get to glimpse again. Shah Rukh Khan had a memorable extended cameo in Kamal Haasan's under-appreciated partition drama, Hey Ram!. The movie first shows SRK's Amjad and Kamal's Saket Ram as thick friends, before the partition drama keeps them separated only for them to have a tragic reunion later on. And in the few scenes they share together, Khan and Haasan's bonhomie is quite memorable. 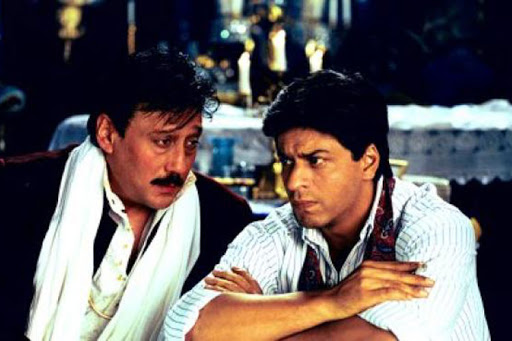 Jackie Shroff has played strict elder brother to Shah Rukh Khan in a couple of films like King Uncle and Trimurti. And a mentor and friend in One 2 Ka 4 and Devdas respectively, and it's in these two films that we see more of their bromance. 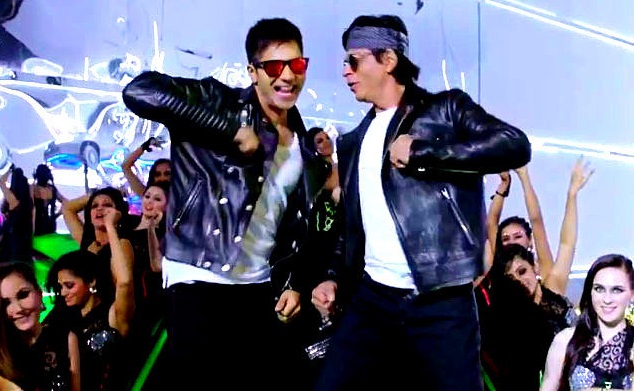 Dilwale might be a movie SRK-Kajol fans wanna forget existed, though the "Gerua" song has to be treasured. But the movie had some positives too. Although Varun Dhawan feels wasted in the film, the camaraderie between him and King Khan, who plays his elder brother, had some really good feels. The only issue is, Varun spends more time with his namesake, Varun Sharma in the movie than with SRK, so that feels a little lost opportunity there. 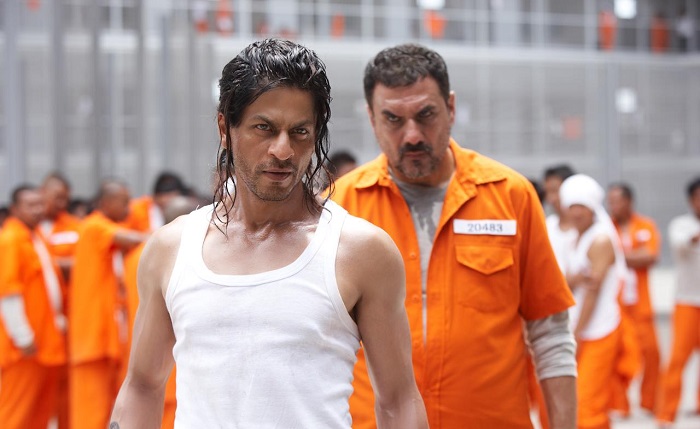 While we loved their easy-going camaraderie in Main Hoon Na and Happy New Year, our most fave Boman Irani-SRK partnership is in Don 2. Playing sworn enemies working together for a heist, there is plenty of mirch masala in this combo, with both actors relishing in throwing barbs at each other. Though it is Happy New Year that brought Irani to this list. Otherwise, we would also have had Nawazuddin Siddiqui here for Raees! 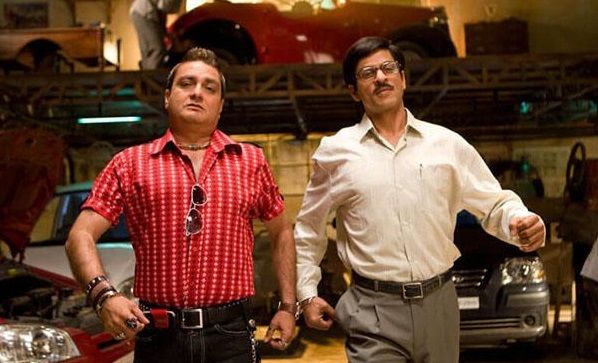 Vinay Pathak plays the friend to Shah Rukh Khan's Surinder Sahni in Rab Ne Bana Di Jodi, who helps him in his crazy scheme of making his wife fall for him. That includes giving Surinder an extreme makeover that even manages to fool the wife. Pathak's boisterousness felt like an awesome combo to SRK's dexterity, and we wish we could see more of this in the future. 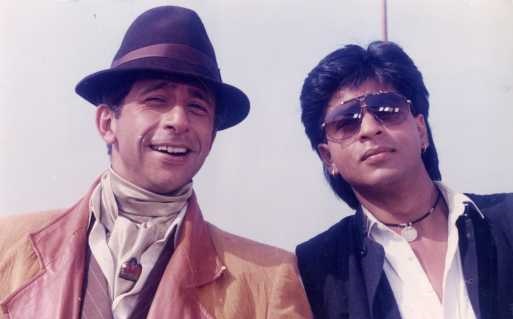 Remember the time when Naseeruddin Shah played a spirit who keeps hounding SRK's naive Sunder in Chamatkar, the ripoff of Blackbeard's Ghost? The two actors hit it off right from their first scene together. Naseeruddin Shah later played SRK's father in Main Hoon Na. 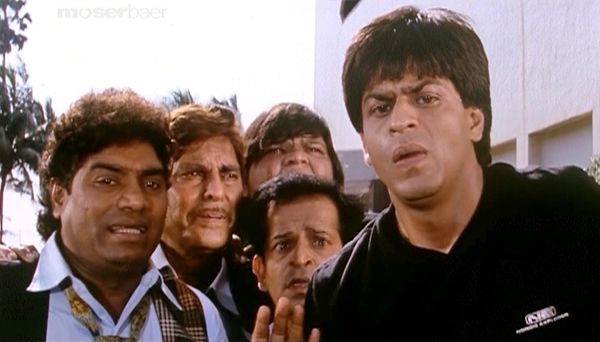 Well, in the '90s and the early '2000s, Johnny Lever didn't just share the best bromantic chemistry with just SRK, but with nearly every leading man then. As for with King Khan, their bonhomie is best seen in films like Karan Arjun, Koyla, Baadshah, Phir Bhi Dil Hai Hindustani etc. 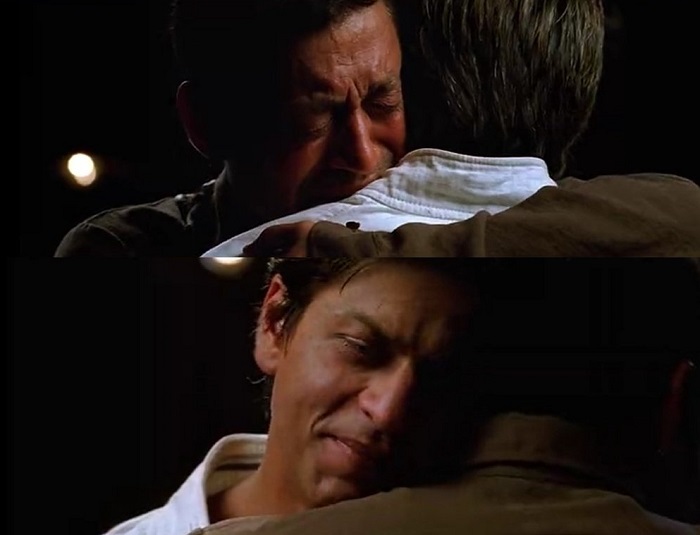 The best scene in Billu, a comedy directed by Priyadarshan, is its ending when Billu the barber reunites with his superstar friend, Sahir. It's a lovely scene, enhanced by the performances of both the actors, and we now feel a tinge of sadness to realise that we may never get to see Shah Rukh Khan work with the late Irrfan again. 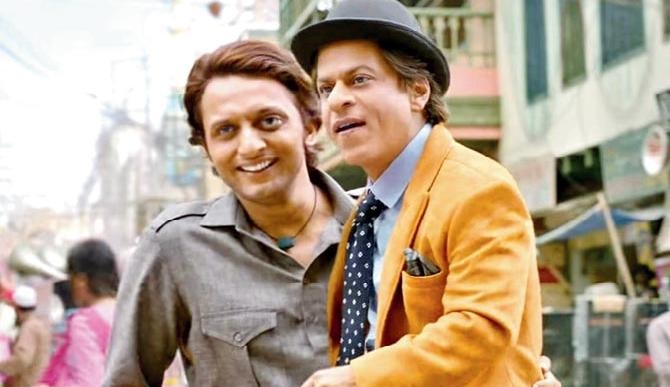 This talented performer is the latest actor whom SRK has found an easy bromance with. While Raees and Zero may have divided King Khan fans, no one had any complaints about their friendly pairing! 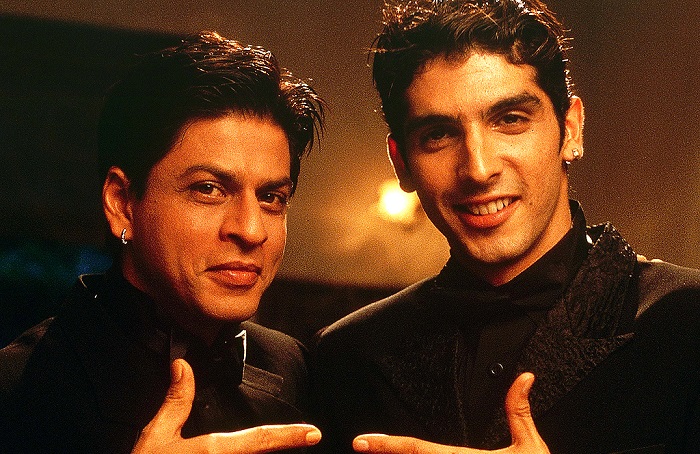 Zayed Khan's stilted performance notwithstanding, one of the easy highlights of Farah Khan's Main Hoon Na, was his fun bromance with Khan, both playing half-brothers in the film. 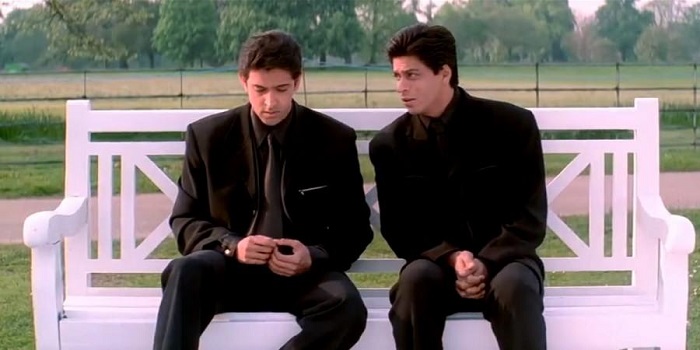 Shah Rukh Khan and Hrithik Roshan are two fine actors, and them playing brothers and ribbing each other in Karan Johar's Kabhi Khushi Kabhie Gham was one of the many joys of the film. Hrithik Roshan even get to be SRK in Don 2, even if that sounded a very implausible scenario! 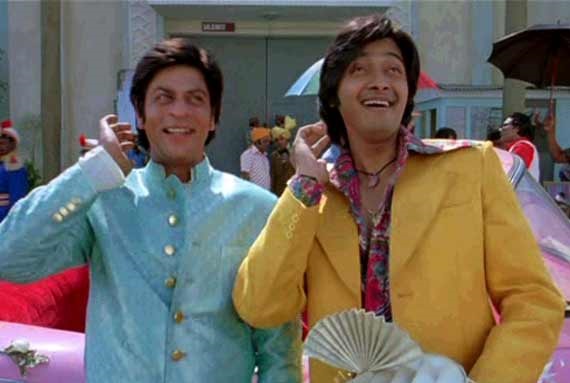 Shreyas Talpade is a wonderful actor with a great comic timing, which matched superbly with that of SRK's in Om Shanti Om. Each scene of theirs together will keep your spirits up! 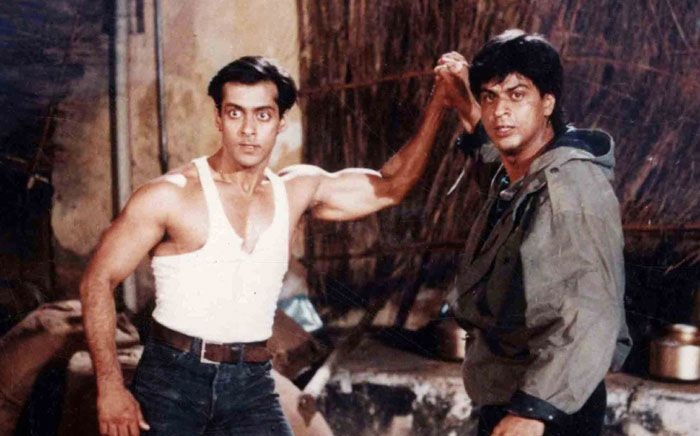 Hands up all those who want to see Salman and Shah Rukh revisit Karan Arjun and do a two hero-movie again? While they are good friends IRL (after two epic fallouts), their bromance in Karan Arjun, Kuch Kuch Hota Hai and the cameos they made in each other's movies - like Tubelight and Zero - managed to enthrall both their fans. They sure did lose some points for errr... trying to over-exploit that bromance in the past couple of years. 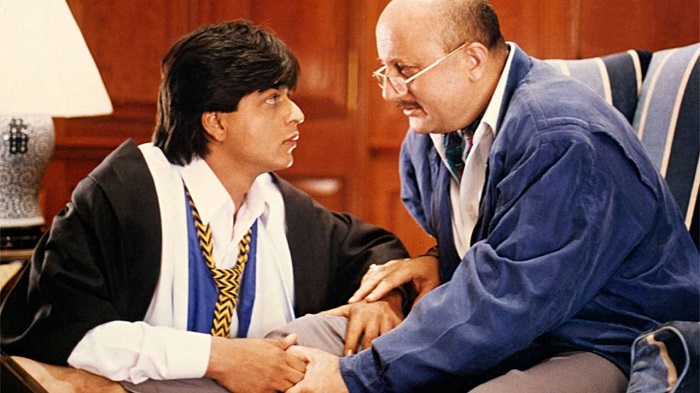 While Anupam Kher and Amitabh Bachchan had played a father figure to SRK in movies, the reason Anupam Kher makes it to the list is purely that when he and Khan play father-and-son, their equation is more on a friendly footing, as evident in DDLJ and Chaahat. And it is a treat to watch these two together!

Did you have any doubt as to who would have taken the top spot? Even though they did only one film as parallel leads, Kal Ho Naa Ho made a truly formidable pairing out of Khan's Aman and the other Khan's Rohit. Their chemistry together was so fantastic that it threatened to outshine their individual chemistry with the leading lady, played by Preity Zinta. Who can blame Kantaben? And also award shows, for exploiting this amazing partnership for maximum entertainment value?

(The above story first appeared on LatestLY on Nov 02, 2020 08:41 AM IST. For more news and updates on politics, world, sports, entertainment and lifestyle, log on to our website latestly.com).