Shah Rukh Khan's birthday is here and we would like to start the day by listing down the names of actresses we wished to see more with the actor in the movies. 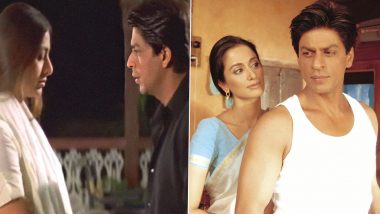 Shah Rukh Khan with Tabu in Saathiya; and with Gayatri Joshi in Swades (Photo credit: Twitter)

It is Shah Rukh Khan's birthday today. This man has inspired a generation of young people to pursue their dream of being an actor. The love for him is not just the stuff of the common people like us but many in Bollywood because this man has made it how! Shah Rukh Khan is the biggest success any outsider in Bollywood has ever tasted after perhaps Amitabh Bachchan. The latter even had a letter of recommendation from Indira Gandhi. SRK just had big dreams in his eyes. Today, he is the ultimate kind of romance because one look at us and we can't stop being 'Paas, aur paas' to him. Shah Rukh Khan’s Fans Honour His Request Of ‘Iss Baar Ka Pyaar Thoda Door Se Yaar’ On His Birthday With Virtual Celebrations – Deets Here

SRK had a lot of successful pairings with actresses from the 90s to now. He has worked with everyone from Sridevi to Alia Bhatt and is still ready to romance anyone. But there were a few pairings which left us wanting for more. We have listed down his Jodi with five actresses which we hoped were repeated more often.

It's a great loss to Bollywood that this beautiful and brilliant actress is no more. When he worked with her in Dil Aashna Hai and Deewana, we loved them together a lot. Only if this could be repeated more often but fate is definitely really cruel!

At the point when Saathiya starring Vivek Oberoi and Rani Mukerji was becoming monotonous in its narrative, SRK arrives with his wife Tabu and bowls us over. Those were the days when cameos were the biggest secrets that makers used to reveal only at the theatres and not make a show out of it like today. So the moment our eyes fell on these two, we felt relieved. They saved the second half from drowning and that's why we still can't understand why these two didn't do a movie together.

Swades is considered one of the best movies of SRK's career and his chemistry with newcomer Gayatri Joshi was lovely. She didn't even seem like a newcomer in the movie. They looked incredible together even when there weren't grand gestures of love made because that wasn't the focus of the film. Post that, she quit movies and today, we are just left with that one movie to enjoy their excellent romantic tension. What a loss!

Isn't it shocking that Shah Rukh Khan and Karisma Kapoor just had one movie together, Dil To Pagal Hai? We aren't counting Shakti here because it was SRK's cameo. We aren't counting her cameo in Om Shanti Om either. So you can imagine what a miss this was! We wonder what the filmmakers in the 90s doing?

Shah Rukh Khan has looked sweet, lovely, affectionate with all his heroines but with Sushmita Sen, he was passionate and their chemistry hot. No wonder she taught Chemistry in Main Hoon Na! We watch that movie for their spark again and again! It's a shame they did just a forgetful Dulha Mil Gaya after that.

(The above story first appeared on LatestLY on Nov 02, 2020 12:00 AM IST. For more news and updates on politics, world, sports, entertainment and lifestyle, log on to our website latestly.com).