King Khan is reportedly featuring in a massy YRF actioner that is titled as 'Pathan', the titular character that he is playing in it. 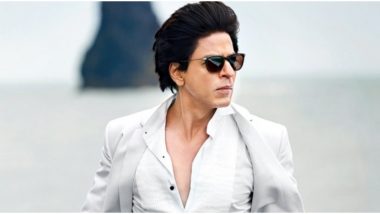 Shah Rukh Khan fans can finally hope for something nice now! The latest reports are here about his next project and if it is true, the fans are in for a massive visual treat! King Khan is reportedly featuring in a massy YRF actioner that is titled as 'Pathan', the titular character that he is playing in it. The film will be probably announced on YRF's 50th anniversary. Shah Rukh Khan's Next with Rajkumar Hirani Might Get Delayed, Actor to Start Working on Siddharth Anand's Action Drama Next?.

As per a report published by PeepingMoon, the superstar will be seen in this action film that is directed by War director, Siddharth Anand. The Hrithik Roshan-Tiger Shroff starrer went on to become a blockbuster on the ticket windows. So, teaming up with the director for an out and out actioner only makes sense!

The release date of the flick is said to be October 2, 2021 (Gandhi Jayanti). The film is slated to go on floors in October this year. However, the banner is yet to make the announcement of the same and the fans are only waiting with a bated breath. Apart from this movie, a Rajkumar Hirani directed social drama based on immigration is also in SRK's diaries.

(The above story first appeared on LatestLY on Aug 07, 2020 03:35 PM IST. For more news and updates on politics, world, sports, entertainment and lifestyle, log on to our website latestly.com).