Shamshera: Karan Malhotra Overwhelmed With the Response to Trailer of Ranbir Kapoor-Starrer

Karan Malhotra, the director of the upcoming Ranbir Kapoor-Sanjay Dutt starrer period actioner Shamshera is thrilled with the response to the film's trailer and has assured that the key video unit is just the tip of the iceberg as it doesn't reveal much about the story. 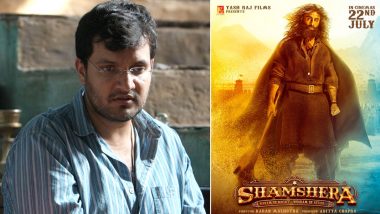 Karan Malhotra, the director of the upcoming Ranbir Kapoor-Sanjay Dutt starrer period actioner Shamshera is thrilled with the response to the film's trailer and has assured that the key video unit is just the tip of the iceberg as it doesn't reveal much about the story.  Shamshera Song Ji Huzoor: Ranbir Kapoor Dances His Heart Out With Tiny Tots In This Peppy Number (Watch Video).

Elaborating on the same, Karan, who made his directorial debut with the 2012 action drama Agnipath, said in a statement, "I'm overwhelmed and humbled by the response that we have got for Shamshera. It validates that Hindi cinema, told in its most genuine and most authentic form, will always connect to the people who want to witness a big-screen spectacle. Adi's unconditional belief in my vision and an outstanding creative collaboration with my cast and crew has brought this revenge-action entertainer to life."

He adds, "What thrills me is that the trailer is just the tip of the iceberg. There is so much more to Shamshera than what the audiences have seen in the trailer. So many more layers, so many more characters, and so many more mysteries will unfold when they watch this splendour on the big screen." Shamshera: Ranbir Kapoor Reveals Interesting Details About His Double Role in the Upcoming Film Co-Starring Sanjay Dutt, Vaani Kapoor.

Ranbir Kapoor, who returns to the silver screen four years after his last release Sanju, is playing a larger than life quintessential Hindi film hero in the film. Ranbir is mightily impressed with the trailer as without giving out important aspects of the film's plot, the trailer has made such a huge impact.

The actor said, "As an artiste, when you and the entire team put in all the hard work trying to make a big screen visual spectacle, it is always heartening and validating to see such unanimously positive responses. I have to congratulate the captain of the ship, Karan Malhotra, YRF, the entire team of Shamshera at this moment. It's a really special feeling for all of us. But what's most exciting is that the trailer doesn't give us the entire story."

Shamshera is set in the fictitious city of Kaza, where a warrior tribe is imprisoned, enslaved and tortured by a ruthless authoritarian general Shuddh Singh. It tells the story of the titular character, who became a slave, a slave who became a leader and then a legend for his tribe. He relentlessly fights for his tribe's freedom and dignity. The film, produced by Aditya Chopra under the banner of YRF, is set to release theatrically in Hindi, Tamil and Telugu on July 22, 2022.

(The above story first appeared on LatestLY on Jun 29, 2022 02:24 PM IST. For more news and updates on politics, world, sports, entertainment and lifestyle, log on to our website latestly.com).