"Fascinated by them once again! Love to see such amazing performances from the New Zealand Bollywood fans. Much love to you guys. Big hug," captioned Sidharth while sharing the dancing video of New Zealand police on his Twitter account. 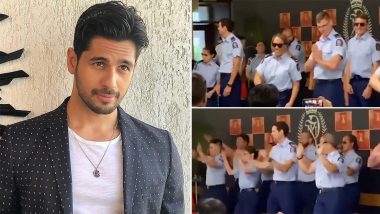 Did you come across a video on social media of a bunch of New Zealand police officers celebrating Diwali by dancing on Bollywood songs? If no, we have it right here for y'all. Student of the Year actor Sidharth Malhotra took to his Twitter account to share a video of those folks grooving on his popular track while celebrating the Indian festival. The song was popular during the time of its release in 2016 and still continues to woo us, four years down the line. Koffee with Karan 6 New Promo: Badshah Calls Doing Kala Chashma for Baar Baar Dekho a Mistake? Watch Video.

"Fascinated by them once again! Love to see such amazing performances from the New Zealand Bollywood fans. Much love to you guys. Big hug," captioned Sidharth while sharing their dancing video on his Twitter account. The police officers looked enthusiast in celebrating the Indian festival and their attempt will certainly warm every Indian's heart. American Tennis Player Alison Riske Grooves to Bollywood Song ‘Nachde Ne Saare’ at Her Wedding With Stephen Amritraj (Watch Video).

Check Out their Performance

Fascinated by them once again!

Love to see such amazing performances from the New Zealand Bollywood fans.

Sidharth and Katrina's Kala Chashma song from Baar Baar Dekho was an instant hit with the masses. So much so that we can shake our legs on it any time of the day. We hope Katrina was able to take a look at it and that she'll share her reaction on it shortly.

(The above story first appeared on LatestLY on Nov 19, 2020 07:18 PM IST. For more news and updates on politics, world, sports, entertainment and lifestyle, log on to our website latestly.com).