Dabangg actor Sonu Sood shows his distaste over Kangana Ranaut's post where she compared the city of dreams Mumbai with Pakistan occupied Kashmir (PoK). Read on. 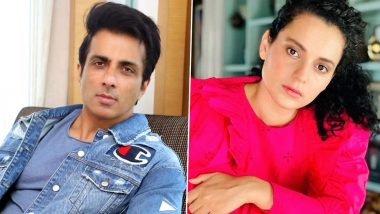 Kangana Ranaut loves to make headlines. It was on September 3, 2020, when the Bollywood actress irked netizens, as well as many celebs when she compared Mumbai with Pakistan occupied Kashmir (PoK) while criticising Shiva Sena leader Sanjay Raut. Among the many stars who showed their disapproval to Ranaut's thoughts, even messiah Sonu Sood echoed the same. Not taking her name nor tagging her, Sood expressed his opinion on Kangana's PoK comment. The Dabangg actor put up some powerful words for the maximum city and we bet it ain't wrong at all. Kangana Ranaut's Old Video Calling Mumbai 'Relatively Safe' is Going Viral after Her Tweet Comparing the City to PoK.

Sonu took to his Twitter and wrote, "Mumbai... This city changes destiny. If you salute, you will get salute." As soon as the actor tweeted this, his comment section got flooded with messages from fans agreeing to his opinion. Well, Mumbai is said to be the city of dreams which has shaped many people and nothing can be compared to its legacy. Richa Chadha, Kubbra Sait, Swara Bhasker Tweet Their Love for Mumbai After Kangana Ranaut Compares the City to Pok.

FYI, this chaos started when Sanjay Raut advised Kangana to not come back to Mumbai if she has no faith in the police here. To which the actress slammed the politician and tweeted, "Shiv Sena leader has given me an open threat and asked me not to come back to Mumbai after Aazadi graffitis in Mumbai streets and now open threats, why Mumbai is feeling like Pakistan occupied Kashmir?"

Not just Sonu Sood, many stars have shown their distaste to Kangana's comment. Swara Bhasker, Riteish Deshmukh, Dia Mirza, Richa Chadha, Renuka Sahane and more have come out in support of the city. Stay tuned!

(The above story first appeared on LatestLY on Sep 04, 2020 08:39 AM IST. For more news and updates on politics, world, sports, entertainment and lifestyle, log on to our website latestly.com).