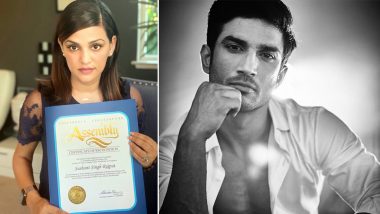 Late Bollywood actor Sushant Singh Rajput has received a special recognition from California State Assembly for his contribution to the world and cinema. Sushant's US-based sister Shweta Singh Kirti shared the news on Instagram with a picture on Saturday. In the picture, Shweta displays the certificate given by California State Assembly to the actor. Sushant Singh Rajput Case: ED Records Statements of Late Actor’s Former Staff Members in Money Laundering Probe

"On the occasion of Indian Independence Day California recognizes my brother's (Sushant) overall contribution to society. California is with us.... are you? Thanks for your support California," she wrote with the image, and put hashtags #GlobalPrayersForSSR, #Warriors4SSR, #CBIForSSR and #Godiswithus. Sushant Singh Rajput’s Sister Shares Pic of a Billboard in California Demanding Justice for The Late Actor (View Tweet)

The certificate states that California State Assembly is giving Sushant the special recognition for his "contribution to Bollywood cinema with special appreciation for all of his philanthropic community work as well as his efforts to promote India's rich culture and heritage".

On the occasion of Indian Independence Day California recognizes my brother’s @itsSSR overall contribution to society. California is with us.... are you? Thanks for your support California. 🙏#GlobalPrayersForSSR #Warriors4SSR #CBIForSSR #Godiswithus pic.twitter.com/owfFhV2XnM

Sushant was found dead at his residence on June 14. His family lodged an FIR accusing his girlfriend, actress Rhea Chakraborty, and her family with abetment to suicide among other charges. The late actor's family, fans and friends have demanded a CBI probe into his death.

(The above story first appeared on LatestLY on Aug 15, 2020 04:10 PM IST. For more news and updates on politics, world, sports, entertainment and lifestyle, log on to our website latestly.com).