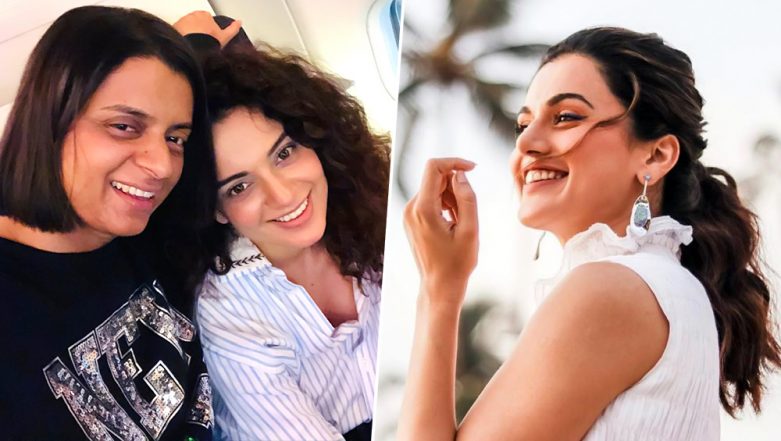 On days when Kangana Ranaut isn't fighting her own battles, sister Rangoli Chandel is ready to fight them on her behalf. While the Queen actress is technologically not so savvy, sister, Rangoli ensures her haters get a taste of their own medicine. From targeting Varun Dhawan for not praising the actress while hailing Judgemental Hai Kya trailer to accusing Taapsee Pannu of being Kangana's 'sasti copy', Rangoli has made some eyebrow-raising allegations and it's time the Game Over actress reacted to them. Rangoli Chandel Calls Kangana Ranaut Haters 'Anti-National' and Fans Are Furious Over This -Read Tweets.

During her recent chat with Rajeev Masand when Taapsee was asked about the same allegations and if they affected her in any way, she said, "I didn’t realise that there’s a patent on curly hair and strong opinions."Later when asked about her 'double filter' comment against Kangana, Taapsee explained the reasoning behind it. "I need a filter too. But it’s because I can’t help being frank and outspoken. I see that as a strength and meant it as a strength. I don’t know why she took it badly," she clarified. Kangana Ranaut- Journalist Controversy: Press Club Of India Releases a Statement, Call Her Behaviour Unacceptable.

Recently the Badla actress displayed her own way of answering to such trolls when she questioned Varun Dhawan on social media. When the Badlapur star forgot to mention her and Bhumi Pednekar's name while praising Saand ki Aankh's teaser, Taapsee jokingly mocked him while taking a dig at Rangoli.