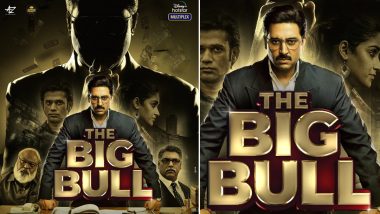 The Big Bull starring Abhishek Bachchan is one of the most anticipated films currently. Considering the current pandemic situation, the makers decided to release the film online of Disney Plus Hotstar, and it finally has made it online today. The Big Bull chronicles the story based on the securities scam of 1992. It is said to be loosely based on stockbroker Harshad Mehta's life and his involvement in financial crimes over a period of 10 years, from 1980 to 1990. The Big Bull Trailer: Abhishek Bachchan Looks Impressive As He Pulls Off ‘The Mother of All Scam’.

The makers have put a lot of effort into making the film and have often talked about it in the past. Director Kookie Gulati talked about how he and his team recreated the 1980s and the '90s in the film by sifting through libraries and reading up a lot about the stock market. "I pushed my team for extensive research through libraries and books. The Big Bull: Ileana D'Cruz Officially Comes on Board for this Abhishek Bachchan Starrer, Shares Her First Look.

We extensively watched a lot of videos of those times and because I'd lived through them at the stock market, it became easier for me. Once the research was done it was still a mammoth task to bring it alive. That's where ADF (Ajay Devgn FFilms) and NY Vfxwallas stepped in! It definitely was a huge collective effort by the entire team," Gulati had revealed.

The film shows the financial crimes and life of Harshad Mehta. Nikita Dutta and Ileana D'Cruz were brought in to play supporting roles.

Here is the Official Trailer of The Big Bull

Reviews for Abhishek Bachchan's The Big Bull are not out yet. LatestLY will update this section once our review is uploaded

(The above story first appeared on LatestLY on Apr 08, 2021 02:28 PM IST. For more news and updates on politics, world, sports, entertainment and lifestyle, log on to our website latestly.com).