The Big Bull: Ileana D'Cruz Officially Comes on Board for this Abhishek Bachchan Starrer, Shares Her First Look (View Pic)

While Ileana was always rumoured to be associated with The Big Bull, she has officially confirmed the same by sharing her first look from it. The project backed by Ajay Devgn has Abhishek Bachchan playing the role of famous stockbroker, Harshad Mehta. 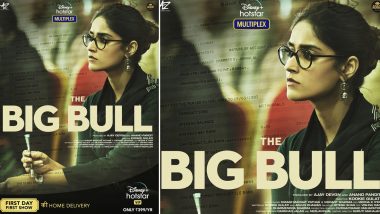 Abhishek Bachchan's next OTT release in The Big Bull produced by Ajay Devgn's production house. The movie reportedly revolves around Harshad Mehta who got involved in SBI's Rs 500 crore scam - the biggest scam that the country witnessed then. While Ileana was always rumoured to be associated with this project, she recently confirmed the same thereby marking it as an official announcement. The project would mark her first association with Jr Bachchan and she's expected to have a strong role in it. The Big Bull on Disney+ Hotstar: Abhishek Bachchan Looks Sharp As 'The Man Who Sold Dreams to India' on the New Poster (View Pic).

Ileana took to her Twitter account to share her first look from the movie and if it's anything to go by, she'll play a journalist who was responsible in unearthing that big scam. It was highlighted by journalist Sucheta Dalal in a column in The Times of India and she later went on to write a book along with journalist Debashis Basu where they chronicled all the incidents and described how Harshad Mehta was successful in selling dreams to the Indian masses. The Big Bull Poster: Abhishek Bachchan Is Imposing And He Wants You To Stay Quiet (View Pic).

Check Out Her Announcement

Excited to be a part of the world of The Big Bull: The Man who sold dreams to India. #TheBigBull a crime drama that shook the financial fabric of the country will unveil soon with #DisneyPlusHotstarMultiplex on @DisneyplusHSVIP pic.twitter.com/YsuzsNEEvm

Interestingly, there's a new series Scam 1992 by Omerta director Hansal Mehta coming up on Sony LIV and it revolves around the same topic. The release date of both the projects are awaited but Abhishek's is expected to hit Disney+ Hotstar in the coming months.

(The above story first appeared on LatestLY on Aug 18, 2020 10:33 AM IST. For more news and updates on politics, world, sports, entertainment and lifestyle, log on to our website latestly.com).