The Girl On The Train: Parineeti Chopra's Suspense Thriller On Netflix Gets A Mixed Reaction From Twitterati

The Girl On The Train is streaming on Netflix now. After critics' mixed reviews for the film, the Parineeti Chopra starrer seemed to have managed to get a low response from the audience. Some found the plot 'idiotic' while others decided to pun on the titled with Malaika Arora Khan instead. 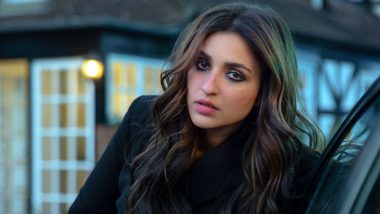 Paula Hawkin's bestselling novel The Girl On The Train got an Indian big-screen adaptation with Parineeti Chopra playing the protagonist. Its Hollywood counterpart had Emily Blunt in the lead. The Hindi movie started streaming on Netflix yesterday and now we have reactions from people on Twitter.  The suspense thriller didn't really get raving reviews from the critics either and now, viewers seem to have a similar response to the movie. The Girl on the Train Movie Review: Parineeti Chopra’s Netflix Thriller Is a Shallow Remake With a Surprise End-Twist (LatestLY Exclusive)

While many appreciated Parineeti's hard-work and Aditi Rao Hydari's work in the film, overall, it has failed to please many.  Some couldn't even believe if this even needed a Hindi film adaptation. There are also some who took this opportunity to spin some memes and pun on the title of the film.

27.02.21 @NetflixIndia Watya a ride it wuz with #TheGirlOnTheTrain. Not a boring one at all. Not once did it derail till da final destination. It wuz filled wit intrigue, mystery, suspense, revelations, deceit. To know the why, who dunnit kept me glued till answers were revealed.

I expected a lot from @ParineetiChopra but the whole movie is a flop. Starting from acting to cast to direction, everything is bad. #TheGirlOnTheTrain

Horrible movie. With pathetic acting by the cast. Sad copy of original.. the only thing that came out in the movie was application of kajal in the eyes.. too much of it....#TheGirlOnTheTrain

#TheGirlOnTheTrain one of the best film of 2021. It's not deserve review, it's deserve MUST WATCH. Acting, Direction, Story all part great. But as pari says NO SPOILER.

Bad, boring and quite idiotic

And here comes the joke...

The Girl On The Train is directed by Ribhu Dasgupta and has Parineeti Chopra, Aditi Rao Hydari and Avinash Tiwari in the cast. The movie is about an alcoholic divorcee who takes a train after being embroiled in a murder investigation. Her unhealthy obsession with Nushrat (Aditi Rao Hydari) makes her quite sinister.

(The above story first appeared on LatestLY on Feb 27, 2021 10:51 AM IST. For more news and updates on politics, world, sports, entertainment and lifestyle, log on to our website latestly.com).