The Girl on the Train Movie Review: Parineeti Chopra’s Netflix Thriller Is a Shallow Remake With a Surprise End-Twist (LatestLY Exclusive)

The Girl on the Train is a Hindi remake of Paula Hawkins' best-selling novel by the same name, that also earned a Hollywood adaptation, starring Emily Blunt. Directed by Ribhu Dasgupta, the remake stars Parineeti Chopra in the lead, along with Avinash Tiwary, Aditi Rao Hydari and Kirti Kulhari. 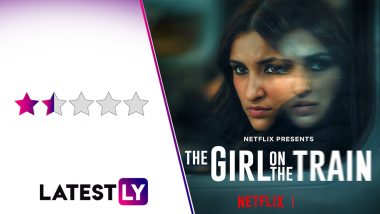 The Girl on the Train Review (Photo Credit: Netflix)

The Girl on the Train Movie Review: To belt out disclaimers at the beginning, I had not seen the Hollywood film starring Emily Blunt. I had read Paula Hawkins' bestselling novel, The Girl on the Train, before that. The novel, while engaging and suspenseful, wasn't exactly a great read TBH, and the killer reveal was kinda predictable, so it didn't encourage me enough to check out the adaptation. So in my review of the Hindi remake, starring Parineeti Chopra, I would not want to draw in comparisons with the Hollywood film. The Girl On The Train: Parineeti Chopra Requests Not To Share Spoilers Ahead Of The Film’s Release, Issues Statement Using #NoSpoilersTGOTT.

As for comparing with the novel, well, that would make for quite an interesting analysis. The Girl on the Train remake is directed by Ribhu Dasgupta, who earlier made the Emraan Hashmi series Bard of Blood for Netflix. Stepping into Emily Blunt's shoes is Parineeti Chopra, who plays Mira Kapoor, a lawyer in Scotland. An alcoholic and a divorcee, Mira suffers from bouts of amnesia, and has not been practising law for a year. The end of her marriage with Shekhar (Laila Majnu's Avinash Tiwary) is still affecting her, even though he has moved on and married someone else.

While her life is in dumps, Mira is curiously attracted to an Indian couple she see in a house near the rail tracks on her daily train transit. She sees them totally in love and seeks the memories of her own happy days of marriage in them. However at the beginning of the film, the girl from the couple, Nusrat (Aditi Rao Hydari) is attacked in a forest, and later found dead. A bloodied Mira is standing at a train station later in the night.

Are these two incidents connected? Mira doesn't remember killing Nusrat, but the investigating officer (Kirti Kulhari) finds rising evidence that she was present at the crime scene. Mira's bouts of anger and amnesia had ended her marriage, so even Mira doubts herself to be a murderer.

At two hours long, The Girl on the Train is, for one good thing, not long enough to be taxing your patience. And still, it turns out to be such a drab and hollow adaptation that you wish the two-hour mark to reach sooner, even before the 60 minutes are up. The Hindi remake remains faithful to the premise, though I cannot say it is a faithful to the book per se.

I am all for filmmakers trying to go beyond the limitations of their book sources; see how it worked wonders for Vikramaditya Motwane's Lootera, adapting O Henry's short story The Last Leaf, and even reinterpreting its climax. Or even Abhishek Kapoor's Kai Po Che, which betters Chetan Bhagat's novel Three Mistakes of My Life.

So Ribhu Dasgupta taking detours from the book is a welcome idea, only if it had brought something different and interesting to the table. He has kept the focus totally on Parineeti's character, which makes sense, since the entire story is through her unreliable point of view. But in the process, he also reduces some of the other supporting characters who added so much substance into the mystery narrated in the book.

In the novel, the characters of Anna, the current wife of protagonist's ex, or Scott, the dead girl's husband, mattered in the sequence of events. In the remake these characters' stand-ins are reduced to merely junior artiste roles that hardly matter to the plot. Even the major supporting ones aren't fleshed out much. The dead girl in the novel was treated like an enigma, but Aditya Rao Hydari's role in the remake feels more like a glorified cameo. The Girl on the Train: From Parineeti Chopra-Emily Blunt to Avinash Tiwary-Justin Theroux, Who is Essaying Which Hollywood Actor's Role in the Hindi Remake.

Even, for the matter, Avinash Tiwary's, whose turn in the third act of the film, feels half-baked and shoehorned, for the character didn't get much scope before. With none of the characters fleshed out much - save for Mira's - The Girl of the Train remake feels more a twist-driven adaptation that aims to impresses you with its reveals rather than in being a gripping psychological thriller. There were opportunities to expand upon the issues of domestic violence and gaslighting, which are just touched here, but never elaborated on. Even the time-jumps that bring a non-linear narrative to the story draw more confusion, that they intend to.

The one new thing that the remake does try out in the second 'twist' reveal in the climax of the film - which I won't spoil here - that is a surprise departure from the novel. It's another matter that the said twist also feels added for mere shock-value, as there is little sense to how it came about. Especially the amount of coincidences that it drags in.

With others shunted out of the spotlight much - Tiwary and Kulhari leave some sort of impression - it is entirely Parineeti Chopra's moment to impress. Her performance rather is not exactly consistent, though. She shines very well in parts where she has to be vulnerable, but struggles when she has to depict the manic episodes of her character. But then we really can't blame her much, when the writing isn't that very supportive.

- Not a Great Adaptation

If you have read the book or seen the Hollywood adaptation (which I am told is quite faithful to the novel), you will be disappointed at how unimpressive the Hindi remake turned out to be. Aiming to impress with solely with its illogical twists, the Parineeti Chopra-starrer turns out to be a shallow version of an already average work. The Girl on the Train is streaming on Netflix.

(The above story first appeared on LatestLY on Feb 26, 2021 05:19 PM IST. For more news and updates on politics, world, sports, entertainment and lifestyle, log on to our website latestly.com).