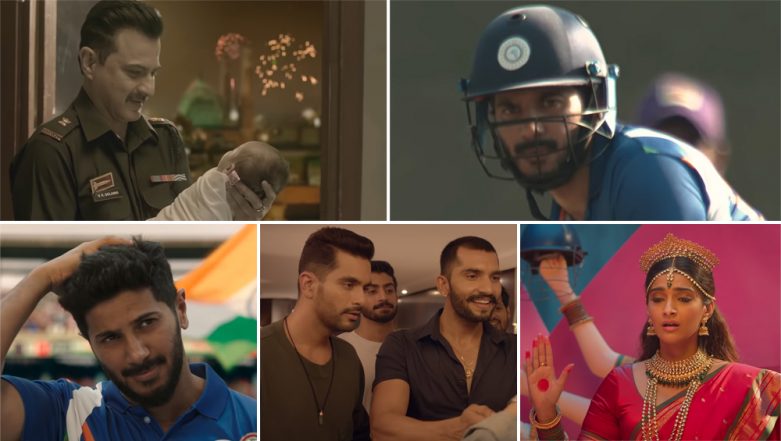 The Zoya Factor, starring Dulquer Salmaan and Sonam Kapoor in the lead roles, is a  light-hearted take on Anuja Chauhan's 2008 novel with the same name. The movie is the story of a young and successful advertising executive Zoya Singh Solanki (Sonam Kapoor) who somehow becomes a lucky charm for the Indian Cricket team during the 2011 Cricket World Cup and how her life changes after she becomes famous. The trailer for the film was released a few days back and opened to positive reviews on social media. The Zoya Factor Trailer: Sonam Kapoor Bowls Over Dulquer Salmaan and the Indian Cricket Team in This Quirky Comedy (Watch Video)

Today, the makers released the first song of the film. Titled 'Lucky Charm', the Shankar Mahadevan crooned number is a peppy, light-hearted and enjoyable number that will instantly lighten up your mood. BUT...

The highlight of this song is definitely at the beginning, where we hear none other than Shah Rukh Khan narrate how Zoya's life takes a turn after her co-incidental birth on the day that the Kapil Dev-led Indian team brought home the World Cup in 1983.

Listen to The Song Below:

For all those who are missing King Khan Shah Rukh Khan in action... the dimpled superstar is all set to be a small yet pivotal part of The Zoya Factor. Shah Rukh Khan will be playing himself in the film and has also given a voice over for the movie's song Lucky Charm, both of which are music to our ears. The Zoya Factor: Did Sonam Kapoor Confirm Shah Rukh Khan's Cameo in the Film?

We definitely give Lucky Charm a thumbs up. The Zoya Factor has been in the making since 2018 and is all set for a September 20, 2019 release. The flick also stars Angad Bedi, Sanjay Kapoor and Sikander Kher in pivotal roles.