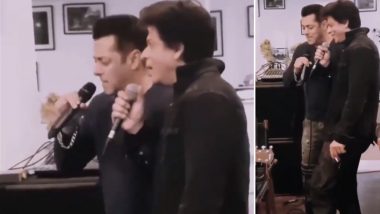 An old video of Shah Rukh Khan and Salman Khan is doing the rounds on social media where they're seen singing the iconic song 'Pyaar Hamein Kis Mod Pe Le Aaya' from Satte Pe Satta. The video is all over the internet, with fan clubs sharing it too. Both Salman and SRK seem to be quite in a jolly mood and all that we wish for, after watching this video, is for to see them do something similar again! After all, it has been quite some time since we last saw Salman and Shah Rukh together. Bigg Boss 12: Salman Khan and Shah Rukh Khan's Reunion Episode to Promote Zero Looks Helluva Fun – View Pics.

The two ruling Khan of Bollywood have had their share of ups and downs but eventually they've always come around. There was a time when Salman and Shah Rukh had a tiff and stopped talking to each other. But it was during Arpita Khan's wedding when the two buried the hatchet and started afresh. They've also done a couple of movies together after that including SRK's latest film - Zero. Salman had a cameo in the Aanand L Rai- directorial.

Epic stuff! This video of @beingsalmankhan and @iamsrk jamming together is sure to make your day. pic.twitter.com/pg12MweGAG

As far as future projects are concerned, Salman has his plate full with Bharat and Dabanng 3 coming up. Shah Rukh has signed Rakesh Sharma biopic Salute and is expected to start shooting for the same soon.

(The above story first appeared on LatestLY on Dec 28, 2018 02:58 PM IST. For more news and updates on politics, world, sports, entertainment and lifestyle, log on to our website latestly.com).