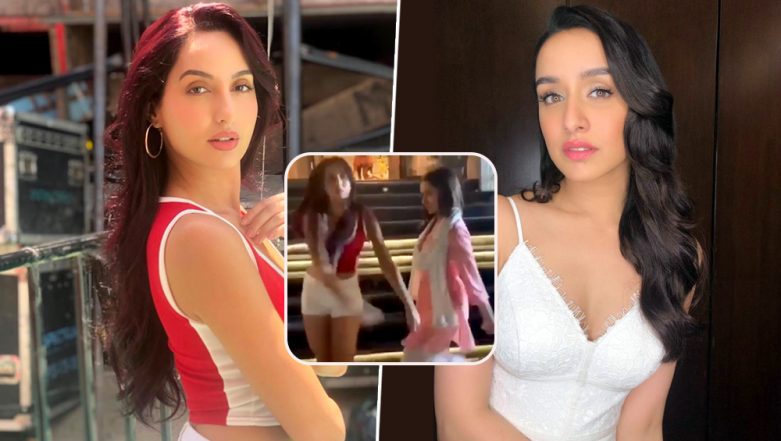 Varun Dhawan's co-stars Shraddha Kapoor and Nora Fatehi seem to be getting along pretty well. The actresses, along with Varun, were seen chilling at a party last night where Nora and Shraddha participated in an impromptu dance-off! It was all cute and funny because they were both enjoying it so much! Nora, Varun and Shraddha will be coming together in Street Dancer and looks like they've become the best of friends. In this newly-released video on social media, Nora and Shraddha are seen showcasing their best and the wackiest moves and we bet you're sure gonna have a good laugh, just like they did! Also, if you want more such drama, go to Shraddha's Instagram and check out her stories ASAP! Nora is seen teaching her the hook step of "Dilbar" too in one of the videos. From London With Love! 'Street Dancers' Varun Dhawan and Shraddha Kapoor Send Valentine's Day Wishes For Their Fans.

Talking about Street Dancer 3, many thought the film would be titled ABCD 3 as it’s the third installment in the ABCD series. However, with the title of the film, it’s clear now that this one is a different dance film. Also, unlike the other films in the series, it's in 3D. Shraddha is also reuniting with Varun Dhawan in the upcoming dance film. The two had shared screen space in ABCD 2. The film will also have Aparshakti Khurana and Shakti Mohan in pivotal roles.

According to various media reports, Shraddha will play a Pakistani dancer, while Varun will be playing a dancer from Punjab. Produced by Bhushan Kumar, Lizelle D’Souza and Krishan Kumar, the film is all set to hit theatres on November 8. Varun will next be seen in Kalank, while Shraddha has three films in her kitty including Saaho and Chhicchore.