Rajkummar Rao was the first choice to star opposite Deepika Padukone in Chhapaak. 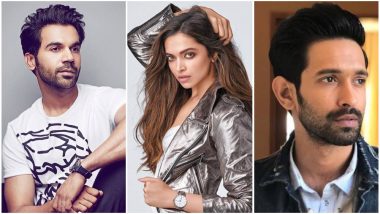 Deepika Padukone is busy shooting for her first production venture, Chhapaak, directed by Meghna Gulzar. It's a biopic on an acid attack survivor, Laxmi Aggarwal where DP will play the protagonist. After delivering a hit with Alia Bhatt in Raazi, Meghna is looking forward to collaborating with the Padmaavat actress and their union seems quite intriguing and interesting to us. Ranveer Singh's Lootera co-star, Vikrant Massey was also roped in to play a key character and inclusion of a brilliant actor like him has only piqued our interest further. However, how will you react if we say Rajkummar Rao was earlier offered his role and he rejected it? Chhapaak: Deepika Padukone, Vikrant Massey and Crew Look Happy as They Wrap Up Delhi Schedule of Meghna Gulzar Movie- View Pics.

No, we aren't kidding when we say that the Newton star was approached to be a part of this project and he had to let go off it. Recently on a chat show when the actor was asked to elaborate on his reason behind rejecting Chhapaak, Rajkummar said,  "I didn't turn it down. Of course not! I loved that script but my dates were so messed up. I'm so looking forward to that film. I kept telling Meghna and Deepika that it's my loss." Deepika Padukone Donning a School Uniform for Chhapaak Shoot in This Leaked Video is Too Cute to Miss.

Well, indeed his loss was Vikrant's gain as the latter was able to come on board and share the screen space with Deepika Padukone. Rajkummar wasn't exaggerating when he said that he has a choc-a-block schedule lying ahead of him. With so many announcement and released on his plate, there was no he could fit another major project in it. Nonetheless, someone wise once said, 'There's always the next time.'

(The above story first appeared on LatestLY on May 15, 2019 10:07 PM IST. For more news and updates on politics, world, sports, entertainment and lifestyle, log on to our website latestly.com).