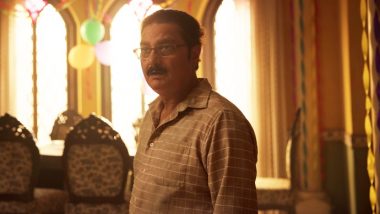 Excited that the past decade or so has witnessed the 'story' becoming principle, film and theatre actor Vinay Pathak, fresh after the success of 'Chintu Ka Birthday' currently streaming on Zee 5, said, "In a significant story, all characters are strong, crucial and fascinating. That opens multiple windows for everyone. Let's be honest, our song and dance cinema is not going anywhere. Darshan Kumaar Believes Insiders Have an Added Advantage As They Know How Film Industry Functions

"Precisely why I have always stressed that Indie filmmakers need to be more accepting of the fact that in a library, bookstore or music shop, there is something for everyone. What is the point in arguing why a guitar sells more than a violin? Variety is fantastic, no? And let's admit it, classical will sell less than pop. But both of them are fantastic." Stressing that personally he does not mind being part of a small community of a specific kind of storytellers, Pathak added, "I find it to be a privileged position. Right now, I am living in the best space of professional life." Sunil Grover Talks About His Struggles in the Industry, Says ‘I Have Been Replaced on Shows and Of Course, It Hurts’

For someone who has been around in the industry for more than 25 years now, answering what fascinates him about humour and satire is mostly governed by present situations and his state of mind at a given time. "It's always in context to our professions, surrounding, dispositions. Right now, it's all about how insignificant we are. Knowing that everyone will eventually die, the real humour is in the fact that at this moment we are alive. It's trying to understand everything is perishable including yourself."

Talking about the Hindi film industry's patchy relationship with intelligent humour, the actor who has starred in films including "Khosla Ka Ghosla", "Bheja Fry", "Island City" and "Johnny Gaddar", said that it is all about time, space and period. "What I find very funny, my kids think is plain OK or that I am over-reacting. They give me a huge perspective -- don't take yourself too seriously. Cinema and humour have changed.

"Go back to 'Jaane Bhi Do Yaaro', take out the historical context, you won't find it that funny. When I saw it with my pre-teen kids, they found 'Golmal' and 'Angur' more funny because they would not relate to the social and political realities of the 80s. Humour, like dramatic stories has gone through a transition. In the context of its own time, every kind of humour valid in its own way. And of course, it boils down to individual perception too."

Making it a point to visit Dhanbad every month where his mother still lives, the actor said that the place is pure nostalgia. "I still carry its essence in every sense of the word. Whenever there, I make it a point to have dinner with friends who I have known since Class 2." Adding that despite the long years spent in the industry, he said that he has just arrived, Pathak, who was part of the recently concluded 'Indus Valley International Film Festival', added, "Sometimes, I still get nervous and caught up in how I will approach a particular role...that nervousness hasn't gone away. Of course, my scale of acceptance has thankfully grown."

Remembering his years at the State University of New York's drama department, the actor said that the best part of the time spent there was that he could make "so many mistakes so soon". "I would not change a thing, even the most embarrassing ones. That place not only gave me freedom of the mind but also taught me a sense of responsibility for my own sake."

Pathak, who was one of the judges on the panel of META this year admitted that initially he was skeptical and cynical selecting and judging plays on video. "However, it turned out that if you have a theatrical vision, you are able to suspend your belief and take that leap of faith. I have been involved with META for a long time now -- participant, jury and host. It was a wonderful experience watching some path-breaking plays this time."

The lockdown, for him, was not imprisonment but more liberating and gratifying in many ways considering he had been reading, writing and learning new skills -- "however banal and morbid they might be". "Interestingly, I picked up sketching too. This time has taught us that we are extremely insignificant, and must get over ourselves."

(The above story first appeared on LatestLY on Aug 15, 2020 05:47 PM IST. For more news and updates on politics, world, sports, entertainment and lifestyle, log on to our website latestly.com).