Thursday Throwback: When Ajay Devgn Welcomed and Hugged Akshay Kumar, Salman Khan and Others Like a True Baaraati at His Sister’s Wedding Reception (Watch Rare Video) 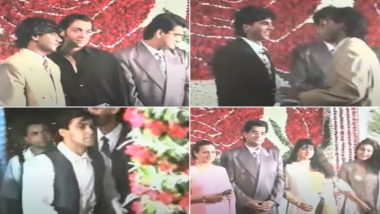 We love throwback videos, don't we? Finding and watching those rare old videos of popular celebs not only takes us back down the memory lane, but also lets us revisit our favourite actor or actress looked or behaved in those days. Our personal favourite videos are from before the advent of 21st century, when the stars behaved in a more unabashed manner, and weren't very PR -driven. There was a sense of naturalism in those times in how stars met and interacted with each other. Like see the below video about Ajay Devgn. Ajay Devgn's Raid to be Turned Into a Franchise; Producer Bhushan Kumar Confirms Script For the Sequel is Under Development.

The video is uploaded by Lehren Retro, a popular YouTube channel that posts throwback Bollywood videos. It was taken from the wedding of Ajay Devgn's sister, Neelam, that happened in the '90s, before he was married to Kajol, who also appears in the video as a guest along with her mother, Tanuja.

Not just Kajol, several other popular stars from the industry can be seen in the video. There is Akshay Kumar, with whom Ajay will be sharing the screen with in the upcoming actioner, Sooryavanshi. The moment where they are seen hugging each other will send a sense of heartwarming feeling in the fans of both the stars. There is also Salman Khan, looking absolutely dapper, who comes with his brother, Sohail Khan (looking so youngish). Youngish is also the word we can use to describe Bobby Deol, who was making his footsteps felt in the industry. Blink and you miss, but you can also spot Vivek Oberoi (who was yet to make his debut then) accompanying his father, Suresh Oberoi).

We also feel a tinge of sadness when we saw our dear departed stars like Sunil Dutt, Raajkumar, Amrish Puri, Rajesh Khanna, Nirupa Roy in the video too. And like a true baaraati and the bride's brother, Ajay welcomed and hugged the high-profile guests.

BTW, did Akshay ever think that his own future father-in-law would be there at the same reception?T

Looking at the above video, don't you feel that Bollywood weddings have lost their charm in this era of Insta and TikTok friendly, protective marriages?

(The above story first appeared on LatestLY on Apr 23, 2020 09:11 PM IST. For more news and updates on politics, world, sports, entertainment and lifestyle, log on to our website latestly.com).