With as Many as Six Projects in her Hand, Kiara Advani is the Busiest Actress in Bollywood Currently

Kiara Advani has managed to beat the likes of Alia Bhatt and Shraddha Kapoor to get the maximum number of projects registered under her name. 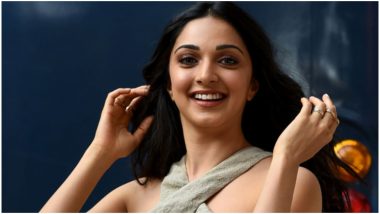 Karan Johar's Lust Stories was a turning chapter in Kiara Advani's professional career. Little did she know that a single scene with a vibrator in her hand would help her sign as many as six movies in Bollywood. Currently, the Kabir Singh actress is the busiest girl in the industry and we mean every word of it. She has even beaten the likes of Alia Bhatt and Shraddha Kapoor to sign maximum movies under her name and this is no small feat. Imagine having a lineup of six big movies with all the prominent production houses! She's definitely on the right track and the future sure looks promising for this rising star.  Kabir Singh Actress Kiara Advani Has an Epic Reply for Trolls Spreading Botox Rumours.

Kiara recently made headlines for signing a heroine-centric movie, Indoo Ki Jawaani. However, this is only the latest project to fall in her kitty. Her palette is currently flooded with all the interesting projects and co-stars from Shahid Kapoor to Akshay Kumar and Sidharth Malhotra. While Alia Bhatt is occupied with five releases - Takht, RRR, Sadak 2, Inshallah and Brahmastra, and Shraddha has Street Dancer, Baaghi 3, Chichhore and Saaho, Kiara has managed to beat them all. Below is a quick recap of what's lying in store for us from her side. Kiara Advani Can’t Stop Blushing While Posing With Arjun Reddy Hero Vijay Deverakonda! See Pics.

The story revolves around a girl from Ghaziabad whose left swipes and right swipes on a dating app result in hilarious chaos. It's a heroine-centric project and Kiara will play the lead in that. The makers are yet to announce who will join her in this project.

Kiara Advani will reprise the role of Shalini Pandey in Shahid Kapoor's remake of Arjun Reddy. She plays a medical student who falls in love with Kabir Singh but destiny has some other plans in its store for them.

Kiara Advani is paired opposite Diljit Dosanjh in Karan Johar's next. The movie that revolves around surrogacy also stars Akshay Kumar and Kareena Kapoor Khan in the lead role.

The film is a biopic on Kargil war hero, Vikram Batra. Sidharth Malhotra essays the role of this army officer who was known for his bravery and valour and Kiara plays his fiancee.

Kiara Advani joins Akshay Kumar in the Hindi remake of Tamil horror comedy, Kanchana. She plays his wife in the movie that recently made headlines after director Raghava Lawrence decided to quit the project.

Kiara is also in talks to star in Dharma Productions' next web venture - Guilty. If she gives her nod, Kiara will play the lead in a story that revolves around a girl accusing a college heartthrob of raping her.

Well, that's the interesting future we were talking about for Kiara and by Kiara.

(The above story first appeared on LatestLY on May 27, 2019 11:40 AM IST. For more news and updates on politics, world, sports, entertainment and lifestyle, log on to our website latestly.com).