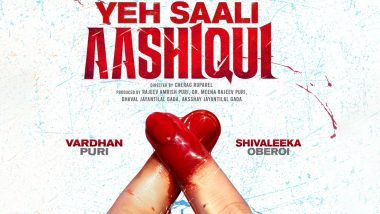 Vardhan Puri, late actor Amrish Puri's grandson, is set to make his Bollywood debut with Shivaleeka Oberoi in a romantic thriller titled Yeh Saali Aashiqui, which was earlier titled Paagal. It will hit the screens in November. Last month, the Central Board of Film Certification (CBFC) has asked the makers of the film to change its title Paagal because of the "social stigma" attached to the word. Rishaab Chauhaan Talks About Making His Bollywood Debut With Brother Krushna Abhishek.

The film was originally slated to release in July. Produced by Jayantilal Gada of Pen Movies and Rajeev Amrish Puri, the Cherag Ruparel directorial will now release on November 22. Before Their Tamil Debut, Did You Know Harbhajan Singh and Irfan Pathan Had Acted Together in This Salman Khan-Akshay Kumar Film? (WATCH VIDEO)

(The above story first appeared on LatestLY on Oct 17, 2019 03:45 PM IST. For more news and updates on politics, world, sports, entertainment and lifestyle, log on to our website latestly.com).