Femina Miss India 2018 Live Streaming: Check Where to Watch Who Will Win This Year's Crown Live on TV and Online 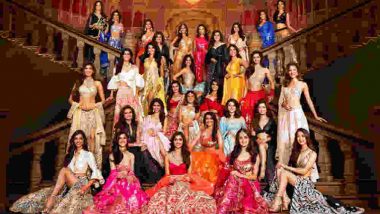 Femina Miss India 2018 beauty pageant will be held on June 19, 2018, at Dome, NSCI SVP Stadium, Mumbai. The Miss India event in its 55th edition will feature 30 states winners. Today's event will crown Miss India who will represent the country on the international platform. The grand finale will be broadcast on Colors Channel. Live streaming of Femina Miss India 2018 can be watched on here. The event begins at 8 pm. You can also check their Twitter page for updates.

Auditions were held in 30 states across the country to find the next beauty queen of India. The top three contestants from every state were given a chance to participate in the state zonal crowing ceremony. The state winner was then given an opportunity to represent her state at the finale of Miss India 2018. The event will be broadcast on Colors Channel.

Bollywood celebrities will be performing at the grand finale in Mumbai today. Actors Kareena Kapoor Khan, Madhuri Dixit Nene, Jacqueline Fernandez were seen practising for the gala eve. The contest is organised by Femina, a women's magazine by The Times Group.

(The above story first appeared on LatestLY on Jun 19, 2018 05:29 PM IST. For more news and updates on politics, world, sports, entertainment and lifestyle, log on to our website latestly.com).