A Beautiful Day in the Neighborhood Movie Review: Watch This Quaint Little Gem for an Incredibly Sanguine Tom Hanks 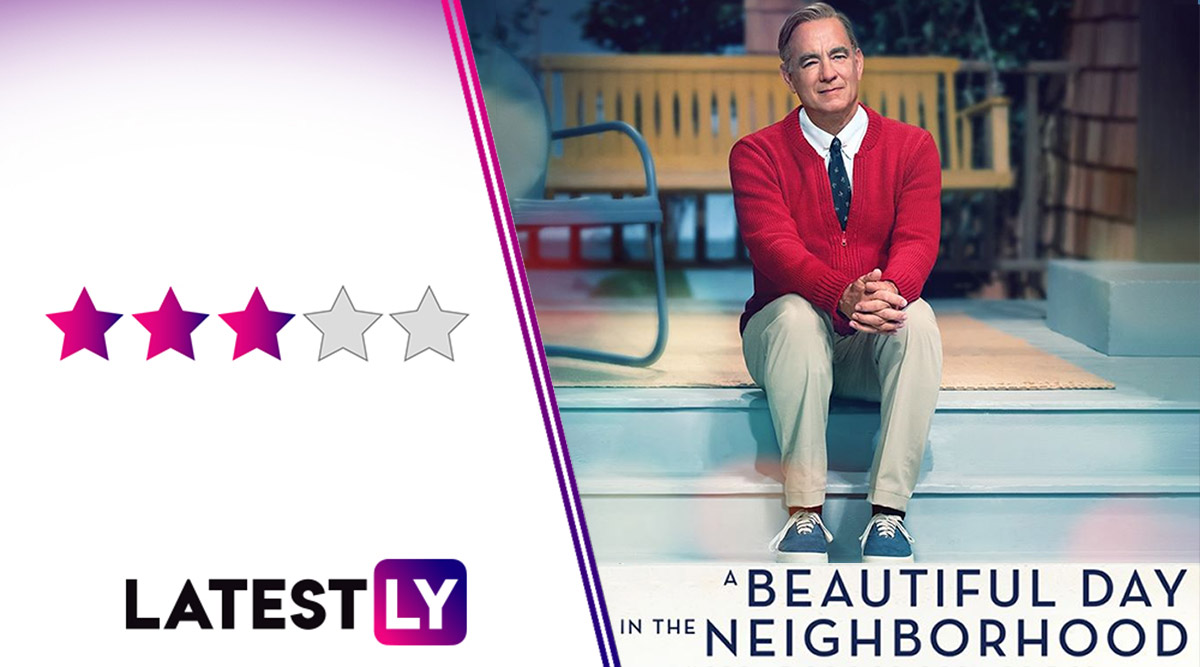 A Beautiful Day in the Neighborhood Movie Review: The moment Tom Hanks steps into the frame in the very first sequence of A Beautiful Day in the Neighborhood, you know this is going to be a magical performance. The whole sequence is shot with the camera keeping itself static and letting Hanks do his thing, and you can't help but admire the niceties of it all. A perennially incredible actor, Tom Hanks just draws you in with a mellow voice that is reeking with magnetic appeal. What a lovely start to what is a very touching, occasionally surreal, drama about human relationships. Oscars 2020 Nominations: Once Upon A Time in Hollywood, Parasite, The Irishman - Films to Watch Out for at the 92nd Academy Awards.

Lloyd Vogel (Matthew Rhys), is an award-winning journalist who is notorious for his scathing pieces. Like his articles, even Lloyd is a cynical, embittered man who is estranged from his father Jerry (Chris Cooper, dependable as always) and doesn't give time to his wife Andrea (Susan Kelechi Watson, supremely confident) and their infant baby. Lloyd is sent to do a profile interview of Fred Rogers (Tom Hanks), popularly known as Mister Rogers, a beloved children television personality and the host of the show, A Beautiful Day in the Neighborhood. That interview brings an evolving change in Lloyd's perception towards life.

Lloyd doesn't get how Lloyd could be so positive and heartwarming, and tries to find any flaw in him. Mister Rogers, however, is an enigma and in his surreal manner, makes Lloyd be less of a cynic, despite himself, and be a better son, husband, father and above all, a better person.

For the uninitiated, A Beautiful Day in the Neighborhood is based on an article written about Fred Rogers in the Esquire in 1998, "Can You Say ... Hero?" by Tom Junod. To appreciate the movie more, a little more understanding of the phenomenon that is Mister Rogers may help. Even if you haven't got to know about this departed celeb and have watched the film, you would want to know more about Rogers once the movie is over. Like Lloyd, the cynic in you would also wonder - is this man for real or is it an elaborate method of his to appear as the epitome of niceness? Does this man never really get angry? His wife Joanna (Maryann Plunkett) claims he does occasionally, but we never are given a hint of that. Maybe the final scene (very beautifully framed) does give a hint at how he vents his frustration away from the eyes of others. There are a couple of strange moments in the film that would even make you question the human nature of Mister Rogers. There is one really powerful scene where Rogers asks for a moment of silence and then subtly breaks the fourth wall to expect the same decorum from the audience. Tom Hanks Disappointed as 'Jeopardy!' Contestants Didn't Identify Him as Mister Rogers.

Director Marielle Heller (Can You Ever Forgive Me?) plays it smart by not making the film about Mister Rogers, instead, keeping it about Lloyd and his troubled relationship with his father, thereby keeping up the mystery around his persona. The estranged father-son thread is a plotline that has been used in quite a few movies, and when Mister Rogers steps out of frame, the pace does slacken. Here's where the underrated performance of Matthew Rhys comes in handy, as we could feel the character's anguish, frustration and confusion immensely. And it is to the director and the actor's credit that the one rare time we see Lloyd smile, they don't really make it feel a very obvious change, instead, allowing us to soak in his new-found emotions.

Watch The Trailer of A Beautiful Day in the Neighborhood:

Also a special mention to how cinematographer Jody Lee Lipes creates soft frames to permeate the goodness of Rogers in each scene, even if he isn't present there. The musical score by  Nate Heller is another big asset for the film.

- The Other Cast Members

A Beautiful Day in the Neighborhood may not be everyone's cup of tea, but do watch this quaint little gem to revisit the underused feelings of warmth and friendship in these distrustful times. And also to reiterate your belief in Tom Hanks in being one of the most gifted actors we are proud to live with.