Ang Lee Birthday Special: From Brokeback Mountain to Sense and Responsibility, 5 of the Oscar Winners Best Film’s According to IMDb 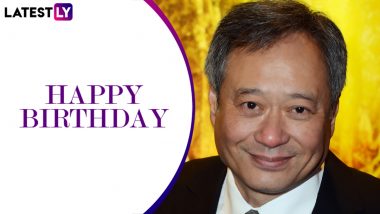 Ang Lee is one of the most successful Chinese directors in Hollywood. Lee has a great eye for visuals and human drama that makes his films so compelling to watch. For example, the way he moves the camera around in Life of Pi to fill up the screen with vibrant colours while the main character is in the center of the frame, this is why we love watching his films so much. Ang Lee Believes 'Gemini Man' is 'full of Potential'.

Ang Lee just doesn't only care about visuals but gives the same amount of importance to the story too. So to celebrate Ang Lee’s 67th birthday, we are taking a look at five of his best films according to IMDb.

Starring Emma Thompson and Kate Winslet, Sense and Sensibility follows the Dashwood sisters, who are members of a wealthy family in England. They are then forced to seek marriage with wealthy suitors in order to gain financial security. The film received acclaim upon release as may praise the performances of the leads.

This Chinese comedy-drama directed by Lee is a blast to watch. It follows the members of the Zhu family as they navigate around their personal lives. The film was great and received acclaim upon release for its great and complex characters.

This wuxia film directed by Lee was based on the Chinese novel of the same name. It follows a warrior who steals a sword and then  escapes into a romantic adventure. The film has it all from action to romance and you should definitely check it out.

Lee’s second win in the Best Director category at the Oscars, Life of Pi was a visual spectacle. Seeing a boy stranded on a boat with a tiger after a shipwreck, Life of Pi was an epic story about survival and adventure.

We hope Ang Lee continues to make beautiful films like this and entertain us. With this we finish off the list and wish Ang Lee a very happy birthday.

(The above story first appeared on LatestLY on Oct 23, 2021 10:10 AM IST. For more news and updates on politics, world, sports, entertainment and lifestyle, log on to our website latestly.com).