Although, if the latest reports are to go by, looks like we may not have to wait longer considering the superhero may appear in Elisabeth Olsen's Disney Plus series WandaVision. 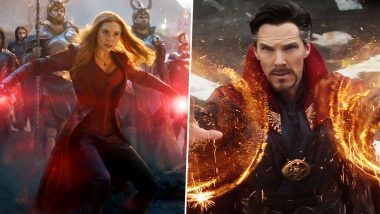 Ever since its announcement at the San Diego comic-con, fans have been eagerly waiting to see Benedict Cumberbatch reprise his role as Doctor Strange in the upcoming film Doctor Strange in the Multiverse of Madness. Although, if the latest reports are to go by, looks like we may not have to wait longer considering the superhero may appear in Elisabeth Olsen's Disney Plus series WandaVision. As per Charles Murphy of Murphy's Multiverse, Cumberbatch's superhero will appear in the final episode of the series. Marvel Phase 4 Films Revealed at San Diego Comic-Con 2019! From Black Widow to Thor 4, Here’s the Complete List of Films and TV Series.

It was already confirmed that at San Diego Comic-Con, WandaVision will be leading directly into Doctor Strange in the Multiverse of Madness and that Elisabeth's Scarlet Witch will be a part of Scott Derrickson's MCU film. Reports also suggest that the series could end with a cliffhanger that eventually finds its way to the Doctor Strange film.

Earlier, Marvel Studio head, Kevin Feige had spoken about the importance of WandaVision series where he shed light on how it will show us Olsen's Wanda Maximoff's journey. How she came to be known as the Scarlet Witch will finally be shown in the series. He had also mentioned how the series is crucial and will have an impact on the Phase 4 of Marvel, which we can now see considering its relation with the Doctor Strange film.

We hear, Benedict will soon be headed for principal photography and can't wait to get a glimpse of him. It was earlier stated that the Doctor Strange sequel will be the first horror movie in the franchise and we bet you can't wait to catch it soon.

(The above story first appeared on LatestLY on Dec 16, 2019 02:50 PM IST. For more news and updates on politics, world, sports, entertainment and lifestyle, log on to our website latestly.com).