Paparazzi spotted Evans and James arriving at the luxe hotel Corinthia, where the duo exited the cab separately as they entered the hotel from different entrances. 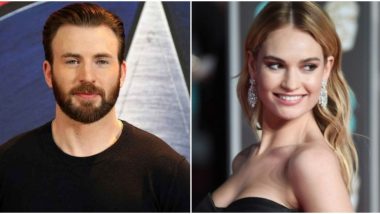 Captain America star Chris Evans seems to have found love in London. Well, it looks like it is the start of a new romance for the actor as he was recently spotted on what seemed like a date night with Cinderella star Lily James. Yes, it seems to be a fairytale met comics romance as the superhero and Disney princess were recently captured spending time together in London. The duo were spotted leaving a club together and even hopped into the same cab. Paparazzi spotted Evans and James arriving at the luxe hotel Corinthia, where the duo exited the cab separately as they entered the hotel from different entrances. Chris Evans Talks About His Post Captain America Career and Says He Loved His Time With Marvel and That He 'Already Misses It'.

The duo were dressed in their and dapper best. While Lily was spotted wearing a silky red dress and a navy trench, Chris Evans kept it simple and smart with a black blazer. There's no telling if Evans and James are 'just friends' and merely had a fun outing together or there's something more. The duo follow each other on Instagram although no interaction between them has been seen before. A few pictures of Chris and Lily have surfaced on social media. Are Lily James and Matt Smith Back Together? Their Stroll Together Amid COVID-19 Lockdown Suggests So! (View Pic).

Check Out a Picture of Chris Evans and Lily James in London:

As for their dating history in the past, Lily James reportedly split from The Crown actor Matt Smith in December last year after dating for almost five years, although the alleged couple was spotted together again in March amid COVID-19 lockdown.  Fans were certainly excited to see Chris and Lily together and seem to be liking the idea of them being the new 'it' couple in town.

(The above story first appeared on LatestLY on Jul 07, 2020 10:07 AM IST. For more news and updates on politics, world, sports, entertainment and lifestyle, log on to our website latestly.com).