While we loved him as Captain America, there's no doubt it has been equally exciting to watch the actor give incredible performances outside the superhero universe too. 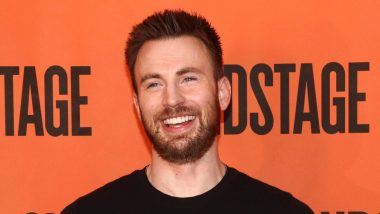 Chris Evans aka Captain America is currently wowing us with his amazing work in his post-Marvel phase. The actor has starred in some amazing roles in films such as Knives Out, Snowpiercer and Defending Jacob. The actor was recently asked if he still misses putting on his Captain America suit and Evans had a rather amazing answer for that. The actor's exit from the Marvel films has certainly been an emotional one for his fans and certainly for his fans too. While we loved him as Captain America, there's no doubt it has been equally exciting to watch the actor give incredible performances outside the superhero universe too. Chris Evans Can't Stop Laughing After Avengers Endgame Co-Star Paul Rudd Wears Thanos' Infinity Gauntlet (Watch Video).

Recently, in an interview with Backstage, the actor spoke about missing Marvel but also excited for what future has in store for him. He said, " “I absolutely loved my time with Marvel; I already miss it. But there’s no denying that it is very exciting to just have complete freedom to pursue whatever my creative appetite wants."

It's no surprise that Evans misses his Marvel days given that the actor was associated with them for almost a decade. The actor is currently getting all the praises for his role in Defending Jacob. Speaking about taking up the series, Evans said, "Initially, I was drawn to the role. I liked the idea of someone who had a traumatic childhood and, as a result, developed methods of coping that are essentially building walls. And he just buries things down with no intention of examining them later in life as a survival tactic more than anything else.”

(The above story first appeared on LatestLY on Jul 02, 2020 09:59 PM IST. For more news and updates on politics, world, sports, entertainment and lifestyle, log on to our website latestly.com).