Chrissy Teigen is again followed by the POTUS account on Twitter after Joe Biden assumed his position as the President Of the USA. Teigen and Donald Trump's feud is legendary with the latter blocking her for saying, 'Lolll! no one likes you.' She had also requested to be refollowed addressing the Tweet to Joe Biden. Her wish has been fulfilled 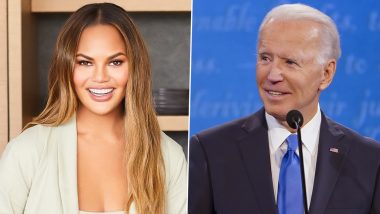 Joe Biden becomes the 46th President Of America and the swearing-in ceremony was celebrated by many. US of A has breathed a sigh of relief to see the last of Donald Trump who has been severely criticized for the way he handled the administration of one of the superpowers of the world. Chrissy Teigen, who had been at loggerheads with Trump for years, was apparently blocked by the POTUS account under Donald Trump. Now she is one of 11 people who the account follows soon after Biden officially became the President of the country. US President Joe Biden Signs Order to End Donald Trump’s Muslim Travel Ban

Yesterday, Teigen had posted hello "@joebiden,  I have been blocked by the president for four years can I get a follow plz." Now she is one of the many accounts followed by POTUS along with many other Biden aides and supporters. Chrissy only recently posted a scathing farewell remark on Instagram for Trump as well saying, "Today our great national fuckup is over, but the shame will last forever." And this feud is quite old.

The official @POTUS account now follows 11 people — all of them Biden aides or accounts, and then @chrissyteigen. pic.twitter.com/XyaQ6rVBei

This is the context you were looking for...

And this is Chrissy going crazy with happiness

Trump had blocked Chrissy in July 2017 after she tweeted, "Lolll no one likes you." Chrissy had even shared a screenshot of the same on Twitter to tell the world that she hated him for 9 years. Trump had also called a loud-mouthed wife on another occasion.

(The above story first appeared on LatestLY on Jan 21, 2021 10:32 AM IST. For more news and updates on politics, world, sports, entertainment and lifestyle, log on to our website latestly.com).