The hardest thing filmmaker Ryan Coogler ever did in his professional life was directing Black Panther 2 without actor Chadwick Boseman, who played the role of Black Panther AKA King T Challa in the first instalment, also directed by Coogler. 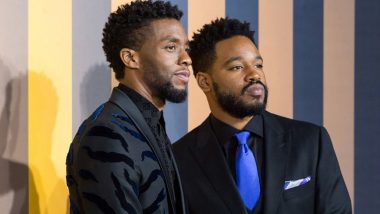 The "hardest thing" filmmaker Ryan Coogler ever did in his "professional life" was directing "Black Panther 2" without actor Chadwick Boseman, who played the role of Black Panther/King T'Challa in the first instalment, also directed by Coogler. "One thing that I've learned in my short or long time on this earth is that it's very difficult to have perspective on something while you're going through it," he said on the "Jemele Hill Is Unbothered" podcast recently. Is Rihanna Going to Play a Major Role in Marvel’s Black Panther 2?

"This is one of the more profound things that I've gone through in my life, having to be a part of keeping this project going without this particular person who is like the glue who held it together," the 34-year-old filmmaker said on the podcast, as reported by Entertainment Tonight. Wakanda TV Series in Works at Disney+, Black Panther Director Ryan Coogler to Helm the Project.

"I'm trying to find a work-life balance. But I'm not there yet, so this is without a question the hardest thing I've had to do in my professional life," he added. Coogler also said that he is currently mourning the loss of a good friend and a colleague, who died last year due to colon cancer. "I'm incredibly sad to lose him but I'm also incredibly motivated that I got to spend time with him," he said.

(The above story first appeared on LatestLY on Mar 11, 2021 06:04 PM IST. For more news and updates on politics, world, sports, entertainment and lifestyle, log on to our website latestly.com).