Disney's Mulan Confirmed to Have an OTT Premiere, Will Also Release On the Big Screen in Select Few Countries 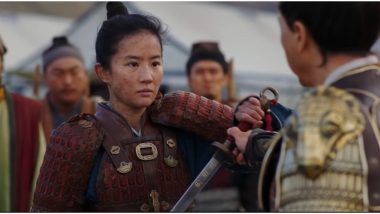 Mulan to have an OTT premiere (Photo Credits: Twitter)

In a recent turn of events, Disney has decided to not wait any longer and have a digital premiere for one of its big-budget upcoming release, Mulan. This live-action adaptation will now release directly on Disney+ on September 4 but viewers will have to pay $29.99 per rental in countries including the U.S., Canada and New Zealand where Disney+ has already established its base. The move comes in after months of delaying the movie and with uncertainty over when the theatre chains will be allowed to start functioning in the US. Mulan First Reactions Out! Critics Call the Live-Action Remake Sexy, Fantastic and Mature (Read Tweets).

“We thought it was important to find alternative ways to bring [Mulan] in a timely manner," said Disney CEO, Bob Chapek. The decision came in weeks after Christopher Nolan's Tenet was announced to release in different theatres starting from August 26. The idea here in was to allow the movie to release in countries where things have returned to normalcy and theatre chains have obtained permission to resume their workings. Tenet makers had also announced September 4 (the Labor Day weekend) for its US release but there's still no clarity if American audiences will be able to relish this Nolan saga on the desired date. Mulan Trailer: A Brilliant Liu Yifei Makes up for Mushu's Disappearance in Disney's New Live-Action Remake (Watch Video).

Mulan was originally slated to release in March, just in time when COVID-19 was turning into a pandemic. It was then delayed to July 24 and finally August 21. However, the final decision of having an OTT premiere for this $200 million movie. The point to note here is that the platform's subscribers will have to additionally pay $30 for renting this new release. Which means it won't be available to anyone - subscribers or non-subscribers for free.

(The above story first appeared on LatestLY on Aug 05, 2020 08:32 AM IST. For more news and updates on politics, world, sports, entertainment and lifestyle, log on to our website latestly.com).