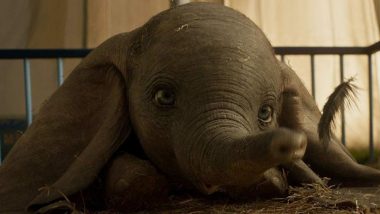 Expecting Tim Burton to direct a film that lacks a dark theme is a little difficult to imagine. And yet, he dipped his toe in something that is not remotely sombre to prove that he can make a Disney film. Considering how Disney's Dumbo is Tim Burton's favourite film, he does his best to reinstate the essence of the 1941 animated film.

Starring Colin Farrell, Danny DeVito, Eva Green, Nico Parker, Finely Hobbins and Michael Keaton, you can't call Dumbo poignant but can definitely call it visually enchanting. The plot of the film is very simple. Max Medici (Danny DeVito) runs a failing circus called Medici & Brothers (there are no brothers here, though). The circus is a blink and you miss it kind of a stint that takes place in Missouri.

However, with a stroke of luck, their "ugly" oversized-ears baby elephant turns the fate of the circus. Thanks to the experiments of the Farrier family's kids (Colin Farrell, Nico Parker, Finley Hobbins), Dumbo learns that he can fly. Overnight, he becomes a money-minting machine for the circus. Word of the flying elephant catches V.A. Vandevere's ears and his greedy eyes fixate on making Dumbo his Wonderland's trophy. Of course, things don't go as planned for anyone, including Dumbo.

If you've watched the 1941 Dumbo, you'll know that the plot is quite simple. There is no big surprise to expect in the storyline of the film. But where Burton is unable to cast his spell of awesomeness (being the plot), he compensates for it by delivering aesthetically pleasing visuals. Burton's filmography is a testament to how he enjoys playing with the colour, texture, screen canvas and the theme. Dumbo is no different as the CGI elephant is very believable, as is the setting of the circus.

With a whimsical theme, Burton expresses his style of filmmaking as he focuses on the aesthetic aspects of the film. That includes the CGI elephant, the Medici circus and even the Wonderland, owned by V.A. Vandevere (Michael Keaton). So if I have to narrow down to the highlights of the film, it would definitely be the visuals created by Burton. However, while we're on the subject of how the visuals give you a jolt of excitement, the writing doesn't.

As mentioned earlier, the film lacks poignancy. Films are supposed to make the audience feel, empathise and sympathise with the characters. With Dumbo though, you will probably feel sorry for the elephant because of his innocent eyes and flappy long ears, also the bond he shares with his mother, Mrs Jumbo. Otherwise, there are no scenes, none, that will leave you overwhelmed. Blame it on the weak writing or the lack of strong characters, the human cast of Dumbo doesn't reflect sentiments that will make the audience reach for the tissue.

- Lack of impact by the cast

To many, Dumbo will be a nostalgic ride. Bringing life to the animated characters of the 1941 film and involving a well-curated CGI elephant who looks too life-like, the VFX guys and cinematographer deserve applause. It is a cute watch that many will like but don't want a repeat.

(The above story first appeared on LatestLY on Mar 28, 2019 12:51 AM IST. For more news and updates on politics, world, sports, entertainment and lifestyle, log on to our website latestly.com).