Eternals: Harry Styles’ Cameo in the MCU Film Was ‘Leaked’ by Salma Hayek Back in June! (Watch Video) 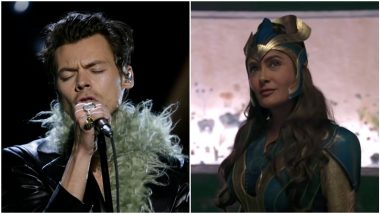 Thanks to spoilers leaked from the Eternals premiere, it is all but confirmed that the former One Direction member, Harry Styles has a cameo in the film. As per certain reports, he is appearing in the second post-credit scene as Eros/Star-Fox, who happens to be Thanos' younger brother. Eros is an Avenger, and the scene reportedly sets the character up for the sequel to Eternals. Eternals: Harry Styles Is Part of This Marvel Film, Plays the Role of Thanos' Brother - Reports.

While the leak of the cameo has infuriated Marvel fans who are annoyed with the journos who did the act, the surprising factor here is that Harry Styles' involvement in the film was hinted way back in June 2021. And it was Eternals star Salma Hayek who had almost confirmed his casting, while appearing on the Ellen Degeneres Show.

Speaking to the host, Salma Hayek recalled a hilarious incident involving her pet owl and a celebrity she met on the sets. She had said, "One time, there was a very important celebrity — I will not say his name — and he was really excited about the owl and was hoping that the owl would go on his head because it was on me. The minute he least expected it, he came on his head but then he did the thing and this thing came out, this ball of rat hair was on his head. He was OK, he was kind of cool. He didn’t scream." Eternals: Harry Styles Joins MCU As Eros? Here's All You Need To Know About Thanos' Brother, Who is An Avenger!

Later, however, Hayek did confirm it was Harry Styles.

When this video came out, Marvel fans had speculated if the popular celeb would appear in Eternals. While the rumour soon died down, the premiere had raised the excitement among Harry Styles fans to see their fave idol in Marvel Cinematic Universe.

(The above story first appeared on LatestLY on Oct 20, 2021 10:51 PM IST. For more news and updates on politics, world, sports, entertainment and lifestyle, log on to our website latestly.com).